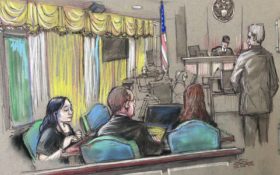 A Chinese businesswoman could be headed to prison for trespassing at President Donald Trump’s Mar-a-Lago resort and lying to federal agents.

Prosecutors want Judge Roy Altman to give Yujing Zhang 18 months in prison when he sentences her Monday afternoon.

The 33-year-old Shanghai consultant was convicted in September of trespassing at the Florida resort in March and lying to Secret Service agents who confronted her.

When Zhang was arrested, she was carrying four cellphones, a computer and an external hard drive, leading to speculation she could be a spy. She was never charged with espionage, though, and text messages presented at trial suggest she is obsessed with Trump.

The president was at a golf course when Zhang arrived at Mar-a-Lago.