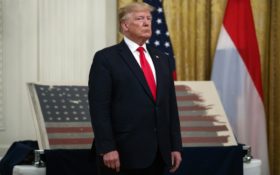 No one knows which two NFL teams will eventually meet in Super Bowl LIV — but President Donald Trump has plans to show up.

According to Politico, insiders say the Trump campaign is dropping $10 million worth of advertising space to air a commerical during the Super Bowl, in an attempt to boost his outreach ahead of the November election.

He has bought 60 seconds of airtime on the biggest television stage in America.

Aides close to Trump, Politico wrote, are still determining the content of the advertisement as Feb. 2. fast approaches.

But the campaign will send out text message ads to its supporters days before the big game.

This is not Trump’s first foray into the advertising during a game — in October his re-election campaign ran a 30-second advertisement during Game 7 of the World Series.

The $10 million advertising spot will fall a day before the Democrats’ Iowa primaries, where candidates will get a genuine taste of where they stand with voters.

And Politico has reported, after speaking with Democratic strategists, that anxiety is high among liberals about Trump’s ability to spend millions of dollars in negative ads on 2020’s Democrats — before any of them even have a chance to retaliate.

But Trump will not be alone on Super Bowl Sunday.

Democratic presidential hopeful and ultra-billionaire Michael Bloomberg is throwing down $10 million himself for an advertising spot, according to The New York Times.

Bloomberg has 60 seconds, too.

A last-minute entry into the Democratic primary, Bloomberg’s entire campaign has been built on ads criticizing Trump.

Aides have said that Bloomberg’s ad will be a never-seen-before spot.

The Super Bowl in February will undoubtedly be a clash of the titans — and it might just be a preview of an election between two billionaires come November.