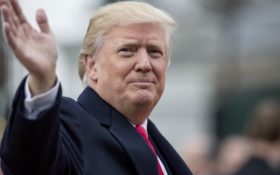 President Donald Trump has only been in office for five days, but the pace he’s setting on executive actions, meetings, and more isn’t just ambitious… It’s head-spinning!

After an inaugural weekend filled with celebrations and behind-the-scene work, Trump three days ago announced his stunning first week’s agenda. Since then, Trump has plowed through a staggering amount of tasks… and it has put former President Barack Obama’s work ethic to shame. While Trump has made ten big executive moves in his first five days, Obama only issued five executive orders in his first seven days. His predecessors, former Presidents George W. Bush and Bill Clinton, each signed only two.

Below are Trump’s 10 biggest executive actions he’s taken (as of Wednesday morning) — and what the moves mean for America.

Trump’s first executive order targeted the expensive and sweeping “Obamacare” law by giving federal agencies broad leeway to chip away at the measure.

Trump signed the executive order in the Oval Office Friday, hours after being sworn in as the 45th president of the United States.

The one-page directive gives agencies authority to grant waivers, exemptions and delays of provisions in the Affordable Care Act. But until it becomes clear what steps federal agencies take as a result, its full impact on Americans and their health insurance is uncertain.

Trump still needs Congress’ help to do away with the law for good.

#2 — TPP torn up, globalism on notice

Charting a new American course abroad, Trump withdrew the United States from the sweeping Trans-Pacific Partnership on Monday, using one of his first actions in office to reject a centerpiece of Obama’s globalist agenda.

Trump’s move on trade aimed to fulfill a central campaign promise even as he appeared to be fixated on re-litigating the 2016 election.

The president has vowed to make jobs and the economy the focal point of his first few days in office. He has repeatedly cast the unpopular 12-nation trade pact as detrimental to American businesses.

“Great thing for the American worker that we just did,” Trump said in brief remarks as he signed a notice in the Oval Office.

The freeze does not apply to the military, Trump said. The memorandum signed by Trump’s is similar to one that President George W. Bush signed at the start of his administration in 2001.

The decision was cheered by conservatives, which have complained about Washington, D.C.’s reckless spending for decades.

Obama had personally halted both the Keystone XL project, which was to bring oil from Canada to the U.S. Supporters of the project said it would lower energy prices for American consumers and would create thousands of new jobs.

Trump, in his continuing effort to undo the past eight years of a Democratic president, invited the Keystone builder, TransCanada, to resubmit its application to the State Department for a presidential permit to construct and operate the pipeline. The company said it would reapply.

The 1,179-mile Keystone XL pipeline would run to Nebraska, where it would join other lines already leading to refineries along the Gulf Coast.

Obama halted the proposed pipeline in late 2015, a move critics said was akin to surrendering to a global environmental deal at the expense of U.S. interests.

Almost simultaneous to the Keystone XL pipeline move, Trump also ordered the U.S. Army Corps of Engineers to quickly review and approve construction and easement requests for the Dakota Access pipeline, a project that has led to major protests by American Indian groups and their supporters.

“Today’s news is a breath of fresh air, and proof that President Trump won’t let radical special-interest groups stand in the way of doing what’s best for American workers,” said Sen. John Cornyn of Texas, the second-ranking Republican in the Senate.

#6 and #7 — Build the wall, and temporary ban on refugees

Trump will begin rolling out executive actions on immigration Wednesday, beginning with steps to build his proposed wall along the U.S.-Mexico border, according to two administration officials.
He’s also expected to target so-called sanctuary cities and is reviewing proposals that would restrict the flow of refugees to the United States.

The president is expected to sign the first actions — including the measure to jumpstart construction of the wall — Wednesday during a trip to the Department of Homeland Security. Additional actions will be announced out over the next few days, according to one official.

A Trump administration didn’t just freeze hiring spending. The president also put a freeze on new Environmental Protection Agency contracts and grant awards, what the administration described Tuesday as a temporary suspension of new business activities at the department.

At least Obama rules 30 were targeted in the Federal Register for delayed implementation, including updated pollution rulings for several states, renewable fuel standards and limits on the amount of formaldehyde allowed in wood products.

President Donald Trump signed a directive shortly after his inauguration ordering a “freeze pending review” on all federal rules issued by agencies but not yet in effect.

Trump’s spokesman Sean Spicer announced Monday that the ban on family planning funding — which was instituted by GOP President Ronald Reagan in 1984 and has bounced in and out of law between Democratic and Republican administrations — had been reinstituted. But it wasn’t until the president’s memorandum was published Monday night that the expansion came to light.

The order directs the secretary of state, in cooperation with the secretary of health and human services, for the first time to extend the requirements in the ban “to global health assistance furnished by all departments or agencies.” The ban is known as the Mexico City Policy.

Trump tweeted early Wednesday that he is ordering a “major investigation” into voter fraud, revisiting previous reports that allegedly uncovered a rigged voting system. The Horn News first reported on the massive voter fraud uncovered in Detroit in December.

I will be asking for a major investigation into VOTER FRAUD, including those registered to vote in two states, those who are illegal and….

even, those registered to vote who are dead (and many for a long time). Depending on results, we will strengthen up voting procedures!