President-elect Donald Trump warned for months that the election process would be rigged — and according to the latest reports out of Michigan, he was right.

Wednesday, a federal judge ordered Michigan’s recount of presidential votes to end by lifting an order that forced a statewide review of millions of ballots — but not before election observers uncovered what The Gateway Pundit called “massive voter fraud” throughout Wayne County, Michigan’s largest county that includes the city of Detroit.

In fact, one-in-three precincts in heavily Democratic Detroit weren’t eligible for recounts due to large discrepancies, which included at least one election observer in Precinct 152 uncovering that votes there may have been counted six times. 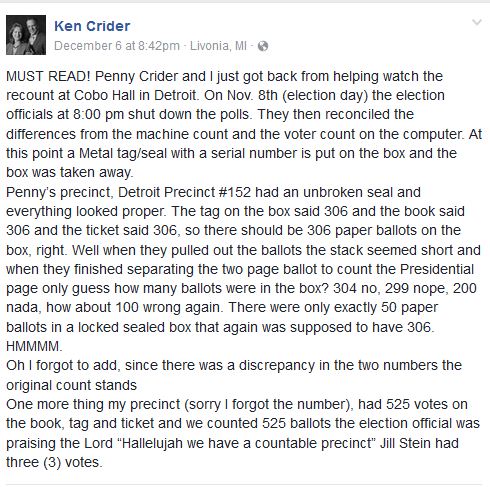 Of course, this wasn’t the only precinct allegedly found with major issues. Across the state, scores of precincts couldn’t be recounted after the number of ballots found didn’t match with the number of voters that cast ballots.

According to The Detroit Free Press, “Gibraltar’s Precinct 1 was not recountable Wednesday because the ballot container was improperly sealed — with duct tape,” and that the seal was so flimsy a hand could easily fit. “Ballot containers are supposed to be locked with special seals bearing serial numbers. Those numbers are supposed to be written in the poll book to ensure it hasn’t been changed.”

The reports of these major incidents are being quietly ignored by the national media, despite no satisfactory explanations being given why largely Democratic votes were being counted in the battleground state up to six times.

“County reports … indicate canvassers were provided no explanation for why the numbers didn’t add up in those precincts. They certified the results of the election anyway,” according to The Detroit News. The precincts were disqualified in the “unprecedented statewide recount of presidential election results because of problems with ballots. Michigan’s largest county voted overwhelmingly for Democratic candidate Hillary Clinton, but officials couldn’t reconcile vote totals for 610 of 1,680 precincts during a countywide canvass of vote results late last month,” the paper reported.

According to critics, this is undeniable proof of what conservatives have long suspected — massive voter fraud in Democratic areas.

“Once they started the Michigan recount in earnest, and knowing he would be exposed, the Detroit City Clerk Daniel Baxter all of a sudden started claiming that the optical scanners which read the paper ballots did not work the day of the election. Baxter blamed the discrepancies on decade-old voting machines. That is his cover story. Nothing like this was mentioned until he realized their voting fraud scheme would be detected,” The Gateway Pundit reported Wednesday.

According to The Associated Press, the recount lasted three days in more than 20 of the state’s 83 counties. Some counties hadn’t planned to start until later.

Federal Judge Mark Goldsmith said Wednesday the recount must be ended according to a decision by the Michigan appeals court, which found that Green Party candidate Jill Stein couldn’t seek a recount.

The Michigan elections board stopped the recount because of Goldsmith’s new ruling and plans to meet again Thursday.

A recount is ongoing in Wisconsin, and Green Party candidate Jill Stein is seeking one in Pennsylvania. Trump won those states, too.