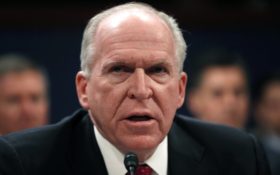 Later, in an interview with The Wall Street Journal, Trump drew a direct connection between the Russia investigation and his decision, citing Brennan as among those he held responsible for the investigation.

“I call it the rigged witch hunt, [it] is a sham,” Mr. Trump told The Journal, which posted its story on its website Wednesday night. “And these people led it!”

He added: “So I think it’s something that had to be done.”

Trump also announced he will be looking into revoking the clearances of a handful of individuals, including former top intelligence and law enforcement officials, as well as a current member of the Justice Department due to security reasons.

At the White House briefing, Sanders read a statement from Trump stating, “At this point in my administration, any benefits that senior officials might glean from consultations with Mr. Brennan are now outweighed by the risks posed by his erratic conduct and behavior.”

Reacting to Trump’s initial announcement, Brennan, in a phone interview with MSNBC, called the move an “abuse of power by Mr. Trump.”

“I do believe that Mr. Trump decided to take this action, as he’s done with others, to try to intimidate and suppress any criticism of him or his administration,” he said, adding that he would not be deterred from speaking out.

Trump, his statement read by his press secretary, accused Brennan of having “leveraged his status as a former high-ranking official with access to highly sensitive information to make a series of unfounded and outrageous allegations, wild outbursts on the internet and television about this administration.”

Trump’s statement said the Brennan issue raises larger questions about the practice of allowing former officials to maintain their security clearances, and said that others officials’ were under review.