Trump will NOT pursue Clinton investigation - The Horn News 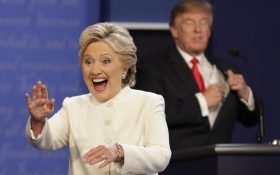 Former Secretary of State Hillary Clinton’s controversial homebrew email server was the subject of months of debate between Clinton supporters and voters backing President-elect Donald Trump leading up to the election.

Trump supporters’ cries to “Lock her up” reverberated through rallies across the country. And during the second presidential debate, Trump told Clinton, “If I win, I am going to instruct my attorney general to get a special prosecutor to look into your situation.”

But according to new reports, that’s not going to happen.

“The president-elect will not pursue any investigations into Hillary Clinton for her use of a private email server, and also for the questions surrounding the Clinton Foundation,” MSNBC’s “Morning Joe” reported Tuesday, saying that their source told them Trump felt they’d “been through enough.”

The sources was confirmed by Trump’s former campaign manager Kellyanne Conway, who said “I think when the President-elect, who’s also the head of your party, tells you before he’s even inaugurated that he doesn’t wish to pursue these charges, it sends a very strong message, tone, and content” to the American public.

“Look, I think he’s thinking of many different things as he prepares to become the President of the United States, and things that sound like the campaign are not among them,” Conway added.

On social media, however, speculation quickly began brewing that the announcement from Conway was a decoy.

Fearing a pardon from President Barack Obama, Trump supporters tweeted speculation that the president-elect was laying low until he could take office in January.

but never said that Sessions wouldn't…

Do you think of Trump should pursue a criminal investigation of Clinton?