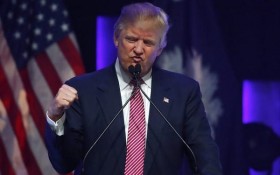 Republican presidential nominee Donald Trump has announced and set into motion a plan to win the general election in November — and political analysts are saying it could turn the electoral map on its head.

According to The Associated Press, Trump is rushing to install operatives in several states that traditionally favor Democrats, pointing to a general election plan consistent with the campaign he has run thus far: Defying conventional wisdom and political trends.

The staffing expansion includes Maine, Minnesota and other places where Trump opens as the underdog, with the New York billionaire seeking to expand the electoral battlefield by drawing on his appeal among working class white voters — and probable Democratic opponent Hillary Clinton’s perceived weakness with them. And his path to the White House goes through states that no Republican presidential candidate has carried since the 1980s.

“I will win states that no Republican would even run in,” Trump said in a recent interview.

The Trump campaign has identified roughly 15 states where it plans to install state directors by the end of the month. They include traditional battlegrounds like Ohio, Florida and Virginia and more challenging terrain such as Minnesota, Michigan, Wisconsin, Pennsylvania and Maine — places Republican have lost for the last six presidential elections or longer. Target states also will likely include Republican-leaning Georgia, where demographic shifts benefit Democrats.

Trump’s deployment of political operatives was outlined by campaign strategists who weren’t authorized to speak publicly about internal strategy and demanded anonymity. The plan will be subsidized, at least in part, by the Republican Party’s new “building fund,” a lightly regulated pool of money that can include donations of more than $100,000 from individual donors, they said, though rules for doing so might pose an obstacle.

Trump is still playing catch-up at this point. While Clinton is already weeks into her own swing-state effort, Trump’s team is scrambling to build a national organization essentially from scratch.

“Up until three weeks ago, there were 102 or 103 employees, which is fewer than Ben Carson had in January,” Trump aide Barry Bennett said. “Today, that number is much bigger, and it’s growing every day.”

The former reality television star’s success in the GOP primary season was fueled almost exclusively by personality and a flood of free media coverage. His expansion into new states signals recognition that Trump must grow his bare-bones operation to be competitive this fall, even if he doesn’t fully embrace other modern-day political tactics.

He refused to add a pollster for the first 11 months of his White House bid, relying on sometimes questionable public polls when making strategic decisions. Shifting toward November’s vote, he recently hired GOP pollster Tony Fabrizio.

It’s a step toward professionalizing the campaign. Up to now, Trump’s strategists have relied on the Republican National Committee’s voter data and internal poling to guide the battleground state staffing plan. Going forward, Fabrizio will work with Trump and committee staff on voter modeling, overseeing polling and voter targeting, according to someone familiar with the hiring.

Trump’s team aims to have about fifteen state directors on the payroll by June 1, supplementing more than 200 committee operatives nationwide. Communications, events and “coalitions” chiefs will augment the campaign’s presence.

To help fund the expansion, Trump’s strategists said he’ll draw from a fundraising deal with the Republican National Committee that should be signed in coming days. Clinton has a similar agreement with Democrats, enabling her to collect checks of more than $350,000 from individual donors.

Trump’s agreement is expected to allow for even larger checks. That’s because the pact will include the “building fund,” which Congress created in 2014 that will enable Trump and Republicans to pull $100,000-plus per donor, despite his repeated criticism of campaign donations.

Republican National Committee spokeswoman Lindsay Walters said no funds from that account will be used to pay for campaign staffers. She said the money would only go to “the operation of the RNC headquarters.”

Trump’s team concedes it wasn’t prepared to shift so suddenly toward the general election. Up until only two weeks ago, it appeared as though the GOP primary would last until the party’s July national convention.

Collins expects Trump’s message to resonate in states like his and “traditional rust belt areas” such as Pennsylvania and Ohio, where many working-class voters usually don’t support Republicans. Among Democrats, Clinton won those three states but lost in Michigan and West Virginia to Sen. Bernie Sanders.

“Whether you call them Reagan Democrats, blue dog Democrats, whatever, that’s what puts those areas in play and why I think he’s going to win in a landslide,” Collins said.