Trump vs. Hillary: The matchup is set - The Horn News 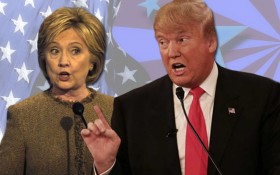 At last! After a long and grinding primary race, the 2016 presidential nominees were finally all but set following Tuesday’s votes.

Billionaire Donald Trump versus former Secretary of State Hillary Clinton. Grab your popcorn, folks, because this showdown may get wild.

Math and momentum on his side, an emboldened Donald Trump offered himself Wednesday as the inevitable Republican presidential nominee and called on balky GOP leaders to embrace the voters’ “tremendous fervor” for his candidacy. And should GOP leaders try to deny him the nomination at a contested convention when he is leading the delegate count, Trump warned, “You’d have riots.”

Trump, who padded his delegate lead and won at least three more states in the latest round of voting, predicted he’d amass enough support to snag the nomination outright before the Republican convention — without much difficulty, in fact — and added that “there’s going to be a tremendous problem” if the Republican establishment tries to outmaneuver him at the convention.

Democrat Hillary Clinton, eager for a November matchup against Trump, took direct aim at him after strengthening her position against rival Bernie Sanders with another batch of primary victories of her own.

“Our commander-in-chief has to be able to defend our country, not embarrass it,” Clinton said in a speech that largely ignored Sanders. “We can’t lose what made America great in the first place.”

With anti-Trump Republicans frantically seeking scenarios to deny the billionaire businessman the GOP nomination, Trump suggested in a round of calls to morning TV shows that the party establishment already is starting to fall in line behind him. Without naming names, Trump said some of the same Republican senators who are publicly running him down have called him privately to say they want to “become involved” in his campaign, eventually.

Trump, devoting little attention to his two remaining GOP rivals, was ready for a head-on fight with Clinton.

He said she’d be “a major embarrassment for the country” and added that she “doesn’t have the strength or the stamina to be president.”

Clinton triumphed in the Florida, Illinois, Ohio and North Carolina presidential primaries, putting her in a commanding position to become the first woman in U.S. history to win a major-party nomination. Trump strengthened his hand in the Republican race with wins in Florida, North Carolina, and Illinois but fell in Ohio to that state’s governor, John Kasich. Votes were also being counted in Missouri, though races in both parties there were too close to call.

Kasich, celebrating his home state win over Trump, told NBC’s “Today” show, “I dealt him a very, very big blow to being able to have the number of delegates.” He added that neither Trump nor Texas Sen. Cruz can win the general election.

But after Tuesday’s contests, it’s mathematically impossible for the Ohio governor to win a majority of delegates before the GOP’s July national convention.

With more than half the delegates awarded through six weeks of primary voting, Trump is the only Republican candidate with a realistic path to the 1,237 delegates needed to clinch the nomination through the traditional route.

His message to the party: “There’s a tremendous fervor out there, and I think the Republicans, the leadership of the Republicans, should grasp it. Because you’re going to win in November if you take advantage of it.”

Clinton has at least 1,561 delegates, including the superdelegates who are elected officials and party leaders free to support the candidate of their choice. Sanders has at least 800. It takes 2,383 to win the Democratic nomination.