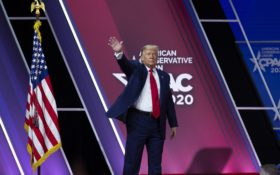 In lieu of a formal debate, President Donald Trump has agreed to answer voters’ questions during a town hall program sponsored by NBC News on Thursday night.

The event will be held outdoors at the Perez Art Museum in Miami.

NBC News says it has a statement from National Institutes of Health clinical director Dr. Clifford Lane indicating he and White House coronavirus task force member Dr. Anthony Fauci have reviewed Trump’s medical data and concluded with a “high degree of confidence” the president is “not shedding infectious virus.”

Still, the second debate between Trump and Democratic presidential candidate Joe Biden has been cancelled. Biden announced he’s host a townhall instead on ABC News — so Trump one-upped him with his own townhall.

Trump tested positive for the coronavirus Oct. 2. He spent three days at the Walter Reed military hospital. He resumed public appearances over the weekend and resumed campaign travel Monday.

A formal matchup between the Republican president and Biden that was scheduled for Thursday in Miami by the nonpartisan Commission on Presidential Debate was canceled after Trump’s positive test.

The commission shifted the format from a town hall to a virtual meeting, and Trump declined to participate.