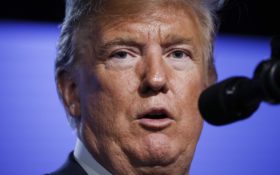 President Donald Trump on Thursday tweeted a letter to him from North Korean leader Kim Jong Un heralding “epochal progress” in U.S.-North Korea relations, despite signs that path-finding diplomacy between the adversaries is running into problems.

Trump described the letter as a “very nice note” and said, “Great progress being made!”

A very nice note from Chairman Kim of North Korea. Great progress being made! pic.twitter.com/6NI6AqL0xt

The letter is dated July 6. That’s when Secretary of State Mike Pompeo visited Pyongyang and seemingly made little progress in fleshing out details of North Korea’s commitment for “complete denuclearization.”

Kim made that commitment when he met Trump in Singapore last month. Kim also agreed then to repatriate remains of U.S. troops who died during the Korean War six decades ago.

A planned meeting Thursday between North Korean and U.S. officials in the Demilitarized Zone between the two Koreas to discuss the return of the remains was postponed.

State Department spokeswoman Heather Nauert said North Korea called at midday Thursday and offered to meet on Sunday instead. “We will be ready,” she told reporters aboard Pompeo’s plane, as the top U.S. diplomat flew home to Washington after attending a NATO summit.

It wasn’t immediately clear what prompted the postponement. South Korea’s Yonhap news agency, citing unnamed sources, said the North requested talks at a higher level. The talks Sunday are expected to involve officials from the Pentagon and the U.N.

Pompeo told reporters after his visit to North Korea last week that the meeting in the truce village Panmunjom was set for Thursday but “could move by one day or two.”

The secretary of state did not meet Kim as he had on his previous two trips to Pyongyang this year, and after his departure, the North’s foreign ministry accused the U.S. of making “gangster-like” demands that it unilaterally give up its nuclear weapons.

Pompeo gave a rosier readout. He reported that the two sides had substantive discussions on next steps toward denuclearization.

During an official visit to Britain, Trump posted images of the Korean-language letter from Kim and its English translation. Kim expresses “invariable trust and confidence” in the president and wishes that “epochal progress” in promoting relations will “bring our next meeting forward.”

But there’s growing skepticism in Washington over the Trump administration’s engagement with North Korea. Recent reports suggest that the North has continued to expand infrastructure at nuclear and missile sites and that U.S. intelligence assesses that the North does not intend to fully denuclearize.

Trump himself has remained upbeat about the outcome of the first summit between the leaders of the U.S. and North Korea. Earlier Thursday, after attending the NATO summit in Brussels, he told reporters that there were clear signs of progress with North Korea, most notably that no missile and nuclear tests have occurred for almost nine months.