Trump to impose sanctions on Turkey over detained U.S. pastor - The Horn News 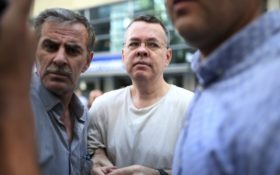 Shortly after the possibility of sanctions was first announced by Vice President Mike Pence Thursday, Trump wrote on Twitter that the U.S. “will impose large sanctions on Turkey for their long time detainment of Pastor Andrew Brunson.”

“He is suffering greatly. This innocent man of faith should be released immediately!” the president added from aboard Air Force One as he flew to Iowa for an event.

Pence’s initial announcement of possible sanctions came at the close of a three-day conference on religious freedom.

Brunson, 50, an evangelical Christian pastor originally from North Carolina, was let out of jail Wednesday, after 1 1/2 years, to serve house arrest because of “health problems,” according to Turkey’s official Anadolu news agency.

“Brunson is an innocent man, there is no credible evidence against him,” Pence said.

Trump has repeatedly demanded Brunson’s release and said on Twitter last week that the pastor’s detention was “a total disgrace.” One of Brunson’s attorneys is Jay Sekulow, who also represents Trump in the Russia investigation.

If convicted, Brunson pastor faces up to 15 years in prison for “committing crimes on behalf of terror groups without being a member,” references to outlawed Kurdish militants and the network of a U.S-based Muslim cleric blamed for a failed coup attempt. He could receive another 20 years if he is found guilty of espionage.

Pence’s announcement was delivered at a conference on religious freedom in Washington. Secretary of State Mike Pompeo also spoke at the conference.

Pence highlighted cases of religious repression in Nicaragua, Iran, China and Myanmar. He also condemned Islamic State group violence toward religious minorities and what he described as rising anti-Semitism in western Europe.

Pompeo announced additional aid for a region of Iraq previously held by the Islamic State group. Pompeo said the department would provide $17 million for demining efforts in Nineveh, an area of Iraq historically home many of Iraq’s religious minorities.

Ties between NATO allies Turkey and the United States have been strained by the pastor Brunson case.

Gulen, who denies orchestrating the coup attempt, lives in Pennsylvania. Turkish requests for his arrest and extradition have not been granted.

At the end of a recent hearing, the court inside a prison complex in western Turkey rejected Brunson’s lawyer’s request that he be freed pending the outcome of the trial. The case was adjourned until Oct. 12.