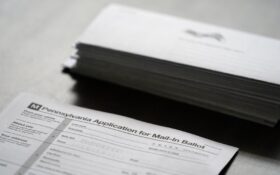 President Donald Trump’s campaign threatened a lawsuit Wednesday if it does not gain access for its campaign employees to observe activity inside newly opened satellite election offices in Philadelphia, where people can register to vote, apply for mail-in ballots and fill them out.

A letter, sent late Tuesday night by a lawyer representing the Trump campaign, insisted the campaign has a legal right to observe the voting process in the heavily Democratic city’s satellite election offices.

“If we have not satisfactorily resolved this matter by tomorrow at 5 p.m., the campaign will seek court intervention,” the lawyer, Linda Kerns, wrote.

Nevertheless, city officials were aware of no lawsuit by Wednesday night.

A member of Philadelphia’s three-person city election board, Commissioner Omar Sabir, said the agency was not changing its stance toward the Trump campaign. There were no reports of intimidation at the city’s satellite election offices Wednesday and he urged people to go out and vote.

“I am urging voters now more than ever to exercise their right to vote, voting is your advocacy for your community,” Sabir said in an interview.

Election lawyers say there is no right under Pennsylvania law, even for a certified poll watcher, to observe inside an election office where someone is registering to vote, applying for a mail-in ballot or filling one out.

Philadelphia is home to one in five registered Democratic voters in the premier presidential battleground state, and its turnout is closely watched in presidential elections. Some recent Pennsylvania polls show Trump and Democratic presidential nominee Joe Biden in a competitive race, while others have Biden slightly ahead.

On Tuesday, Trump retweeted claims on Twitter on Tuesday by his son Eric and a campaign staffer that Trump campaign employees were being “blocked” or “kicked out” of Philadelphia’s just-opened satellite election offices.

In Tuesday night’s debate with Biden, Trump repeated that claim, as he urged his supporters to serve as poll watchers and said he would not go along with an election result if he sees “tens of thousands of ballots being manipulated.”

Sabir responded, “bad things do not happen in Philadelphia.”

Trump has targeted Philadelphia before.

In his 2016 campaign, Trump claimed that the only way he could lose Pennsylvania is if there is “cheating,” and, during an October campaign stop in the state, he singled out Philadelphia as a city to watch.

The fight over how satellite election offices operate could widen.

In the coming days, Bucks, Chester and Delaware counties — all suburbs of Philadelphia — plan to open satellite election offices to help collect what is expected to be a tidal wave of mail-in ballots amid concerns over Postal Service delays. Allegheny County, home to Pittsburgh, plans to open nine, starting Oct. 10.

Poll watching is already being litigated by the Trump campaign, which has sued in federal court to invalidate a provision in state law that limits poll watchers to residents of that county. Republican lawmakers also have pushed to remove the provision from law, both in 2016 and 2020.

Wolf in 2016 threatened to veto the bill and opposes removing the county residency requirement now, his office said.

Democrats say efforts to end the county residency requirement are part of the Trump campaign’s wider strategy of voter intimidation and suppression by targeting polling places and mail-in ballots in Philadelphia and other heavily Democratic areas.

As part of his long-running effort to discredit voting by mail and cast doubt on any election result that goes against him, Trump told a rally at Harrisburg International Airport on Saturday night that the only way he can lose Pennsylvania is if Democrats cheat.

With Democrats warning of election interference, state House Republican lawmakers on Wednesday began advancing a just-introduced resolution to independently set up a committee with subpoena power to investigate how the election is being conducted.