Trump: They’re all scared of me - The Horn News 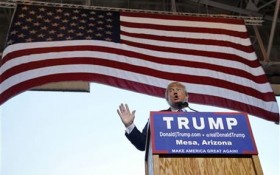 Republican presidential candidate Donald Trump on Wednesday shrugged off the barbs he received at the final GOP debate of the year, saying he’d been prepared for more criticism as the front-runner.

It was a rebuke to Jeb Bush, the former Florida governor, who jabbed Trump the most during the two-hour debate.

“Poor Bush,” Trump said at a rally at Phoenix-Mesa Gateway Airport, adding that he wouldn’t mind it if Bush chose not to endorse him if he becomes the nominee.

“I went in there saying, ‘Boy, this is going to be a tough evening,’ ’cause I heard all of them were going to come at me,” Trump told his supporters. “I was prepared.”

Instead, Trump said, most of his rivals, including Texas Sen. Ted Cruz, were unexpectedly nice to him. Cruz and rival Marco Rubio, who have emerged as the two most popular alternatives to Trump, mostly jostled with each other.

But Bush, the presumed leader of the GOP presidential nomination fight when he revealed his plans to run a year ago, turned his fire on Trump. Mired in the single digits, far below Trump, in national polls, Bush told Trump during the match-up that he couldn’t insult his way to the presidency and called the former reality show host a “chaos candidate.”

Trump arrived at Wednesday’s rally in his private 757 jet, which slowly rolled up to the open hangar where supporters gathered as soaring instrumental music played.

During the rally, Trump also went after Rand Paul, saying the Kentucky senator doesn’t have same “spark” as his father, Ron, who ran for the presidency in 2008 and 2012.

The billionaire businessman was introduced by Maricopa County Sheriff Joe Arpaio, who applauded Trump for bringing the issue of illegal immigration to the forefront in his campaign.