Trump: Ted Cruz is a “great hypocrite” - The Horn News 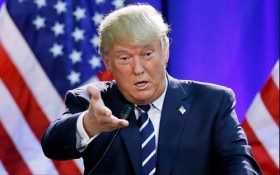 For many Republicans, the combined ticket of billionaire Donald Trump and Texas Sen. Ted Cruz was a match made in heaven.

And throughout the summer, the two Republican presidential candidates shared what Trump called a “bromance.”

As polls tightened, however, their relationship quickly unraveled. This weekend, the war of words between the two Iowa front-runners escalated, with Trump calling Cruz a “great hypocrite” and Cruz hitting Trump for his past support of abortion.

Cruz supporters turned on Trump during a tea party gathering in South Carolina on Saturday, loudly booing the billionaire for an attack on Cruz.

“You give a campaign contribution to Ted Cruz, you get whatever the hell you want,” Trump told the gathering, in reference to Cruz’s failure to disclose certain bank loans during his 2012 Senate bid.

By the time Trump added that he thinks Cruz is “a nice guy,” loud boos had commenced among the hundreds of attendees divided almost exclusively between the two leading GOP contenders.

In front of the same audience a few hours earlier, Cruz instead urged voters to examine candidates’ records on a range of issues dear to conservatives, among them repealing the Affordable Care Act, fighting abortion and same-sex marriage, and opposing bank bailouts like the one Congress adopted in 2008.

“Don’t listen to the words on the campaign trail,” Cruz said. “Look to action.”

It was a more subtle reminder of Trump’s shifts on a number of issues: He previously backed abortion rights and same-sex marriage.

Meanwhile, Trump’s official Twitter feed blasted Cruz throughout Saturday, as he sought to capitalize on a pair of New York Times reports detailing Cruz’s failure to explain fully two loans from Citibank and Goldman Sachs that he now says he used to help finance his 2012 Senate campaign.

Cruz calls it a “paperwork error” that he included the loans only on Senate personal financial disclosures, but not on the Federal Election Commission filings that typically get more attention before voters cast ballots. The Senate forms do not state explicitly that the money was used on his campaign.

In New Hampshire earlier Saturday, Trump called Cruz a “great hypocrite” for campaigning as an anti-establishment critic of big banks.

On Twitter, Trump said the banks “own him (Cruz).” He added, “No wonder the banks do so well in the U.S. Senate.”

Once he raised the issue at the tea party event, Trump didn’t back down amid booing. “Show us proof,” yelled one Cruz supporter. Trump retorted: “Say whatever you want. He didn’t report his bank loans.”

For Trump, the offensive continued his pattern of aggressiveness toward whichever of his rivals he says have attacked him first, from Jeb Bush and Rand Paul to former candidates like Rick Perry and Lindsey Graham.

In this case, there’s risk for both candidates. Cruz aides believe the bank loans story will not hurt him. He has admitted what he says is an inadvertent error and will amend all the necessary forms, they argue. Meanwhile, GOP primary voters have long accepted that Cruz has credibly positioned himself as an anti-establishment crusader — while few, if any of his rivals will want to raise a debate of who is more beholden to Wall Street.

Yet Trump could prove the exception. He’s an unapologetic and proud New Yorker. And now he is tying the bank loan storyline to Cruz’s recent critique that Trump represents “New York values,” an all-encompassing insult understood by residents in more rural, conservative states like Iowa and South Carolina.