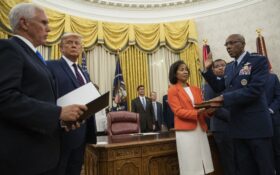 Vice President Mike Pence administered the oath of office to Brown, who was confirmed by the Senate in June in a 98-0 vote. Trump called the moment “special” and praised Brown, saying, “You’ve had an incredible career and this is a capper.” He added it was an “amazing achievement” and an “incredible occasion.”

Brown told Trump, “It is a distinct honor for me to have this opportunity.” He assumes the post later this week.