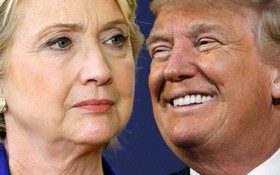 GOP presidential nominee Donald Trump promised that he could win the White House with or without the support of the mainstream Republican establishment.

And it appears he may be correct.

That’s according to the latest poll by Quinnipiac University, which shows that Trump’s path to victory in November is clearing.

According to the poll results, Trump is in a virtual tie with presumptive Democratic nominee Hillary Clinton in the key battleground states of Pennsylvania and Florida, while leading by four points in Ohio.

That’s a sharp and frightening reversal of fortune for Clinton’s camp, which had expected to cruise to victory in those states.

“Six months from Election Day, the presidential races between Hillary Clinton and Donald Trump in the three most crucial states, Florida, Ohio and Pennsylvania, are too close to call,” Peter A. Brown, assistant director of the Quinnipiac Poll, wrote in the polls press release. “At this juncture, Trump is doing better in Pennsylvania than the GOP nominees in 2008 and 2012. And the two candidates are about where their party predecessors were at this point in Ohio and Florida.”

Trump’s surge in support seems to be coming from both sides of the isle. According to the Washington Times, Trump “… appears to be winning some of the independents and Democrats that will be critical to grabbing deep-blue Pennsylvania and Delaware, states that haven’t voted for a Republican president in a generation.”

Trump himself shrugged off the need for GOP unity heading into the November general election and a likely match-up against Clinton, even though that would be the goal in any normal election year after a candidate effectively clinches the nomination, as Trump did last week.

“I think this is a time for unity. And if there’s not going to be unity, I think that’s OK, too,” Trump said on Fox Business Network. “I mean, I’ll go out and I think I’ll do very well. I think I’m going to win the race either way.”

Ever confident, Trump announced that New Jersey Gov. Chris Christie, a former foe but now an enthusiastic supporter, would head his transition team as he heads for the White House after the election.