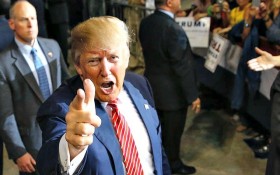 Republican Donald Trump seized a decisive Super Tuesday victory, and with math and momentum on his side his rivals are scrambling for last-chance, long-shot strategies.

And for the Republican establishment and their darling Sen. Marco Rubio, the search has become increasingly dire.

Trump’s seven victories in states across the country amounted to a GOP establishment collapse with no clear sign of rapid recovery. While his rivals promised to fight on, the party remained deeply divided over the preferred Trump alternative. Marco Rubio won only liberal Minnesota. Sen. Ted Cruz took his home state of Texas, neighboring Oklahoma and Alaska.

In his victory speech, Trump sent a chilling warning to the GOP establishment. A moment after Trump professed to have good relationships with his party’s elite, he issued a warning to House Speaker Paul Ryan, who had declared earlier Tuesday that “this party does not prey on people’s prejudices.” Trump said that if the two don’t get along, Ryan is “going to have to pay a big price.”

Meanwhile, Rubio struggled Tuesday to convey optimism even as they vowed to fight on.

Simple math reinforces a bind for the Republicans who reject Trump, as the brash billionaire businessman carried seven states and continues to barrel toward the 1,237 delegates needed to secure the GOP nomination.

Trump won at least 203 delegates Tuesday. Cruz collected at least 144 delegates and Rubio picked up at least 71. Overall, Trump leads with 285 delegates, Cruz has 161, Rubio has 87, Kasich has 25 and Carson has eight. It takes 1,237 delegates to win the GOP nomination.

Increasingly, leading Republicans talk of a contested convention in July as their best remaining option for stopping Trump, whose divisive rhetoric about immigrants and ethnic and religious groups has some fearing a GOP wipeout in November.

Trump, a political newcomer, pulled in two-thirds of voters looking to install an outsider in the White House, while GOP voters seeking an experienced candidate were split between Rubio and Cruz, both first-term senators.

Speaking from his gold-flecked Mar-a-Lago resort, Trump asserted that his candidacy is a “movement” and he claimed he would unify the party was by training his fire on Clinton.