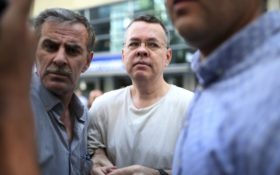 The United States slapped sanctions on two Turkish officials on Wednesday over a detained American pastor who is being tried on espionage and terror-related charges. Turkey vowed retaliation “without delay,” warning it would harm relations between the two allies.

President Donald Trump followed through on his warning last week to impose sanctions against Turkey, a key NATO ally, for its treatment of Andrew Craig Brunson in a case that has strained U.S.-Turkish relations. Turkish President Recep Tayyip Erdogan had said his government wouldn’t back down and was willing to “go its own way” if the U.S. did act.

White House press secretary Sarah Huckabee Sanders said the sanctions by the Treasury Department would target Turkey’s justice and interior ministers, whose agencies she said were responsible for the pastor’s arrest and detention.

“We’ve seen no evidence that Pastor Brunson has done anything wrong, and we believe he is a victim of unfair and unjust attention by the government of Turkey,” Sanders said.

Secretary of State Mike Pompeo said the Turkish government refused to release Brunson “after numerous conversations between President Trump and President Erdogan,” along with his conversations with Turkish Foreign Minister Mevlut Cavosuglo.

“President Trump concluded that these sanctions are the appropriate action,” Pompeo said.

In Ankara, Turkey called on the U.S. to reverse its decision and promised to “respond in kind without delay” against what it described as an aggressive stance by the Trump administration. It did not elaborate on possible measures.

A Foreign Ministry statement called the sanctions a “disrespectful intervention in our legal system” that would harm “the constructive efforts toward resolving problems between the two countries.”

Brunson, 50, was arrested in December 2016 following a failed coup on charges of “committing crimes on behalf of terror groups without being a member” and espionage. He was recently released to home detention. He faces a prison sentence of up to 35 years if he is convicted on both counts at the end of his ongoing trial.

The evangelical pastor, who is originally from Black Mountain, North Carolina, has lived in Turkey for 23 years and led Izmir Resurrection Church.

Under the sanctions to be imposed by the Treasury Department, any property, or interest in property, belonging to Justice Minister Abdulhamit Gul or Interior Minister Suleyman Soylu within U.S. jurisdiction would be blocked. Americans would generally be prohibited from doing business with them.

Gul shrugged off the decision, writing on Twitter that he had no assets outside Turkey and that he dreamt of owning “a small olive grove” in his Turkish hometown.

Turkish Foreign Minister Mevlut Cavusoglu tweeted: “The U.S. attempt to impose sanctions will not remain without an answer.”

Erdogan has denied speculation that there had been an agreement to swap Brunson for Turkish citizens being held abroad, particularly 27-year-old Ebru Ozkan. Ozkan had been detained by Israel on terror-related charges, but was deported this month.

The Turkish leader previously connected Brunson’s return to the U.S. to the extradition of Fethullah Gulen. Ankara blames Gulen for the coup attempt, while the cleric denies involvement.

Erdogan has also warned that Turkey would seek international arbitration if the United States refused to deliver F-35 fighter jets in retaliation.