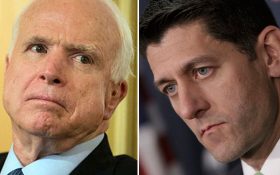 Either get on board the “Trump Train” — or prepare to be run over by it!

That seems to be the message Republican presidential candidate Donald Trump has for Republicans holdouts. The brash billionaire has begun openly taunting the leaders of his own party by refusing to endorse House Speaker Paul Ryan of Wisconsin and Sen. John McCain of Arizona in their GOP primaries.

Trump’s stunning slap at two of the nation’s most prominent Republicans dramatically escalated GOP turmoil barely a week after a convention intended to promote party unity. With the general election campaign now squarely underway, Republicans found themselves once again forced to answer questions about the latest boundary-defying pronouncement from Trump at a moment when most would rather be talking about Democratic presidential candidate Hillary Clinton’s record.

Trump made his declarations in an interview with The Washington Post in which he also lit into New Hampshire GOP Sen. Kelly Ayotte. All three lawmakers are facing primary challenges from the right in coming weeks, and each has vocally criticized Trump’s attacks on the Muslim parents of an Army captain killed in Iraq.

“I’m just not there yet,” Trump said, closely echoing Ryan’s own demurral before eventually endorsing Trump, when he told CNN on May 6, “I’m not there right now.”

It was the verbal equivalent of a body slam.

Of McCain, whom he’d previously criticized for being taken captive in Vietnam, Trump said: “I’ve never been there with John McCain because I’ve always felt that he should have done a much better job for the vets.”

Trump’s comments appeared to represent the most dramatic break yet with a Republican establishment whose support for their presidential nominee has been reluctant at it’s best — and downright hostile at it’s worst. It came on the same day that President Barack Obama questioned why McCain, Ryan and other GOP leaders continued to support Trump.

McCain had been particularly incensed over Trump’s insults against the parents of U.S. Army Capt. Humayun Khan, chiding Trump’s decision to “defame those who are the best among us.”

Yet it was not clear that, even as Trump found another line to cross and another political norm to defy, any Republicans would rescind their support. None did so publicly and aides to both Ryan and Ayotte made clear their plans hadn’t changed. McCain met privately Tuesday night with Trump’s vice presidential running mate, Indiana Gov. Mike Pence.

For his part, Trump sent a Twitter post from @realDonaldTrump early Wednesday proclaiming, “There is greater unity in my campaign, perhaps greater than ever before.”

For Republicans, renouncing Trump might not yield much benefit beyond ensuring more headlines connecting them to Trump, something most want to avoid. Instead, vulnerable Senate Republicans like Ayotte and McCain are trying to focus on running their own races and hoping voters will make a distinction between them and Trump.

“I call it like I see it, and I’m always going to stand up for our military families and what’s best for the people of New Hampshire,” was all Ayotte would say.