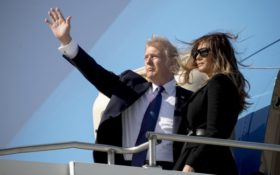 Ronald Reagan complained about the “bum rap” Nancy Reagan got for buying White House china. George H.W. Bush defended Barbara Bush after female students objected to her as their commencement speaker because she dropped out of college to marry him.

Trump pushed back recently after Vanity Fair magazine, citing an anonymous source, reported that Melania Trump didn’t want to become first lady “come hell or high water” and that she didn’t think it would happen. Trump also took offense at the magazine’s assertion that he also never thought he’d be elected.

Not known to back away when he feels that he or a loved one has been slighted, the president rose to his wife’s defense hours after she pulled off one of the most high-profile first lady projects: decorating the White House for Christmas.

“Melania, our great and very hard working First Lady, who truly loves what she is doing, always thought that ‘if you run, you will win,’ Trump tweeted. “She would tell everyone that, ‘no doubt, he will win.’ I also felt I would win (or I would not have run) – and Country is doing great!”

Melania, our great and very hard working First Lady, who truly loves what she is doing, always thought that “if you run, you will win.” She would tell everyone that, “no doubt, he will win.” I also felt I would win (or I would not have run) – and Country is doing great!

It wasn’t the first time, or the last time Trump felt compelled to stand up for his former fashion model spouse.

He complained in an October television interview about the “tremendous abuse” she endured for leaving the White House in her signature stilettos as she joined him on a recent trip to survey hurricane damage in Texas. Sharp critiques about her footwear lit up social media as soon as departure photos of the Trumps were posted. Mrs. Trump changed into sneakers during the flight.

“She’s taken tremendous abuse,” Trump said in the interview with former Arkansas Gov. Mike Huckabee on Trinity Broadcasting Network. “She wants to look, out of respect for the White House, wants to look good leaving the front entrance to the White House. So she dresses up and she puts on formal shoes, high heels, and she leaves the White House going to Texas.”

Trump said his wife is a private person and “she doesn’t need this,” meaning the criticism. “But she does like to help people. She sees how important it is.”

Vanity Fair also took a big hit on Thursday from Trump, following their release of a video mocking Hillary Clinton — that has sparked a major uproar.

After the publication shared their video, they received plenty of backlash that called their staff sexist towards women. Vanity Fair was quick to apologize and state that they had “missed the mark.”

Trump took to Twitter to share their annoyance with how the publication handled their latest scandal — how could they so easily apologize for a minor mockery of Hillary, but not apologize for slandering the Trump family?

Vanity Fair, which looks like it is on its last legs, is bending over backwards in apologizing for the minor hit they took at Crooked H. Anna Wintour, who was all set to be Amb to Court of St James’s & a big fundraiser for CH, is beside herself in grief & begging for forgiveness!

Katherine Jellison, an Ohio University history professor who studies first ladies, said other presidents’ wives had experience in the political spotlight where everything is dissected, unlike Melania Trump, whose professional experience before the White House largely consisted of fashion runways, red carpets and motherhood.

“This kind of scrutiny that Melania Trump is encountering as first lady and follows every first lady is a new experience for her,” Jellison said. “And another difference is she’s married to a man who is quick to respond to anything he sees as a slight or a criticism. I guess that includes comments regarding his wife.”

The first lady is no pushover, though. Like her husband, Mrs. Trump will fight back and did so after the president’s first wife, Ivana, referred to herself as “first lady” while promoting her memoir. Ivana Trump also said she speaks with the president about every two weeks and has a direct line to the White House.

Presidents are spouses, too, and some have reacted as would any husband who thinks his wife is being unfairly criticized, Jellison said.

Reagan complained at a 1981 news conference about the “bum rap” his wife was getting over the purchase of new china settings at the same time the administration was cutting school lunches. Reagan said the White House hadn’t had a complete set of china since Harry Truman, some three decades earlier, and that a full table couldn’t be set for a state dinner without mixing existing china patterns.

Nancy Reagan had ordered a Lenox service for 220 people, each setting containing 19 pieces, “at cost” or $209,000. Reagan said it was a private gift at no expense to taxpayers.

George H.W. Bush defended Barbara Bush’s role as a wife and mother after Wellesley College’s invitation for her to speak at commencement in 1990 irritated some in the all-female student body. The first lady had dropped out of Smith College after two years to marry Bush.

Asked about the dustup, the president joked at a news conference that he wouldn’t argue with the students’ view that his wife’s accomplishments were largely derived from marriage to him. He added that “these young women can have a lot to learn from Barbara Bush and from her unselfishness and from her advocacy of literacy and of being a good mother and a lot of other things.”

Clinton had a more forceful reaction in 1996 after New York Times columnist William Safire called Hillary Clinton a “congenital liar” following revelations about her involvement in an Arkansas land deal known as Whitewater, and her role in a controversy involving dismissals at the White House travel office.

Mike McCurry, the White House spokesman, said Clinton, “if he were not the president, would have delivered a more forceful response to that on the bridge of Mr. Safire’s nose.”