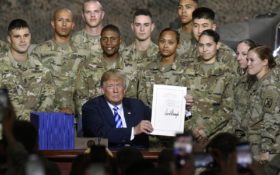 “Hopefully, we’ll be so strong we’ll never have to use it. But if we ever did, nobody has a chance,” he said.

The measure includes provisions designed to improve how the Defense Department handles reports of child-on-child sexual assaults among the tens of thousands of children and teens who live and go to school on the military bases where their parents serve.

Among the changes, the bill creates new legal protections for students at Department of Defense Education Activity schools and requires the school system and the Pentagon to develop new policies for responding to reports on bases more generally. Schools and the armed services also must start tracking incidents.

The annual measure sets policies and a budget outline for the Pentagon and will be followed by a later appropriations bill.

In a statement Monday, McCain expressed pride in the bill.

“I’m proud the NDAA is now law & humbled Congress chose to designate it in my name. As Chairman of the Armed Services Cmte, I’ve found high purpose in service of a cause greater than self_the cause of our troops who defend America & all that she stands for,” he tweeted.