Trump set to CRUSH rivals in Nevada - The Horn News 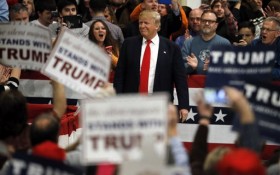 Donald Trump, the billionaire businessman from New York turned Republican presidential frontrunner, has seen his campaign become the subject of withering attacks from both the GOP party establishment and the mainstream media for months.

On Tuesday night, it looks like none of that will matter. Trump is expected to win in Nevada by a landslide; he is currently polling at 42.0%, and is expected to get double the support of two of his closest rivals, Sen. Ted Cruz (20.7%) and Sen. Marco Rubio (18.9%).

A Trump victory would be the third in a row after The Donald registered big wins in both the New Hampshire and South Carolina primaries — and his dominance continues to suck the air out of the room. There’s at least one more campaign that’s not expected to survive the Silver State.

Dr. Ben Carson, once the darling of the Tea Party, has seen his support wane across the country as the primaries have worn on. With an expected fifth-place finish in Nevada, Carson’s campaign seems to be running out of steam and political analysts are expecting him to suspend operations soon.

Meanwhile, other Republican presidential candidates presented last-minute appeals for support across the breadth of Nevada, jockeying for votes with unabashed critiques of their White House rivals.

Cruz spent significant time Monday seeking to explain the ouster of his spokesman for tweeting a story that falsely accused Rubio of insulting the Bible. And when the candidates weren’t directing their fire at each other, they used scattered appearances on the eve of Tuesday’s caucuses to assail Democratic candidate Hillary Clinton.

Trump is still chafing from his lone loss in the GOP presidential selection sweepstakes, a narrow defeat at Cruz’s hands in Iowa. He reiterated his calls for disqualifying Cruz because of “his fraudulent win in Iowa.”

Cruz saved some rhetorical ammunition for Clinton, telling an audience in Elko, Nevada he likes the thought of her behind bars. One of his supporters had shouted that he should “put Hillary in jail” if he’s elected in November. Cruz paused, and then responded: “With any luck, she’ll be there already.” Clinton has been trying to surmount a months-long controversy over her use of a private email server during her time as secretary of state.

Meanwhile, conservative heavyweights continued to back Rubio, with many saying they see him as the candidate who can unite a disharmonious Republican Party. Arkansas Gov. Asa Hutchinson and Utah Sen. Orrin Hatch were the latest to endorse the Floridian. South Florida’s three Cuban-American members of Congress also said that they shifted their support to Rubio, having previously backed Jeb Bush, who dropped out of the campaign following the South Carolina primary.