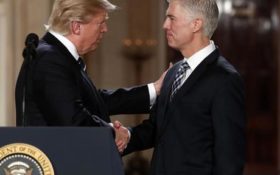 The justices are weighing what to do with the president’s ban on travelers from six mostly Muslim countries.

But the reason for his high court trip Thursday is purely ceremonial, to mark Justice Neil Gorsuch’s ascension to the bench.

Trump has no role in the courtroom ceremony, but presidents often make the trip to the court from the White House to honor their nominees.

While the dispute over the travel ban and other controversies have simmered during Trump’s first few months in office, his choice of the 49-year-old Gorsuch for the Supreme Court won widespread praise in the legal community as well as unanimous Republican support in the Senate.

A federal judge first blocked Trump’s initial travel ban in early February. The president issued a revised version in March. It never took effect after judges in Maryland and Hawaii put it on hold. Two federal appeals courts have since upheld those lower court orders.

The Trump administration has asked the Supreme Court to allow the ban to take effect immediately.

Gorsuch actually has been a member of the high court since April, and he even issued his first opinion on Monday.

The investiture ceremony typically takes place before a new justice’s first day on the bench, but Gorsuch was confirmed and sworn in on a tight schedule.

He filled the seat that had been held for nearly 30 years by Justice Antonin Scalia, who died in February 2016. The high court seat was vacant for nearly 14 months after Senate Republicans blocked President Barack Obama’s nomination of Judge Merrick Garland.