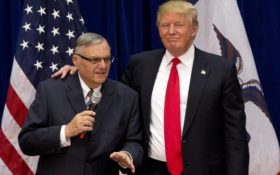 President Donald Trump has repeatedly shown his commitment to combating illegal immigration, and just proved he will protect those that join him in the fight.

Sheriff Joe Arpaio was convicted of a misdemeanor crime for ignoring a U.S. court order to stop traffic patrols that targeted immigrants. The decision was made by a judge appointed by none other than former president Bill Clinton.

According to Fox, Trump suggested the pardon could come in the next couple of days.

Arpaio brushed off his recent criminal conviction in U.S. court as a “petty crime” and insisted he won’t seek a pardon from President Donald Trump, but that doesn’t mean Trump won’t follow through with it anyway.

In an interview with The Associated Press, the former sheriff of metro Phoenix said he was astonished he was found guilty of a crime after more than 50 years in law enforcement.

“S-U-R-P-R-I-S-E-D,” Arpaio said of the misdemeanor for defying a court order to stop traffic patrols that targeted immigrants.

Unlike other local police leaders who left illegal immigration enforcement to politicians, Arpaio made hundreds of arrests in traffic patrols that sought out criminal illegals and business raids in which his officers targeted illegals who used fraudulent IDs to get jobs.

He said he won’t rule out running for office again and remains steadfast in his support of Trump.

“I was with him since day one, and I am with him until the end. I don’t ask him for anything. He can throw me into the swamp and cover me up in garbage, and I’d still support him,” Arpaio said.

Arpaio showered Trump with support during the presidential campaign. Trump has invoked Arpaio’s name in his calls for tougher immigration enforcement and used some of the same immigration rhetoric and advocated for tactics that made the former Arizona lawman a national name a decade earlier.

He appeared for Trump at rallies in Iowa, Nevada and Arizona, including a huge gathering in the affluent Phoenix suburb where the sheriff lives. Arpaio also gave a speech at the Republican National Convention in which he said Trump would prevent immigrants from sneaking into the country.

In Arpaio’s case, his attorneys have vowed to appeal the verdict and the former sheriff said he isn’t surrendering. He said the worst legal trouble he had faced were two parking tickets.

“Here I am at the end of my career sitting at a defense table in a contempt-of-court case,” Arpaio said.

He took solace in the fact his conviction isn’t a felony.

But in the next couple days, Arpaio may have nothing to worry about.