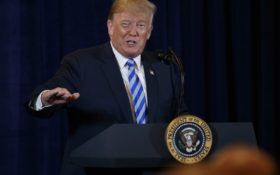 President Donald Trump is daring New York Gov. Andrew Cuomo to challenge him in 2020, warning the Democrat that “anybody that runs against Trump suffers.”

In remarks Monday night at a fundraiser in upstate New York, Trump said that Cuomo once called him and promised that he wouldn’t run against him.

The challenge came as Trump raised money for the re-election of Republican congresswoman Claudia Tenney.

Trump’s visit to Utica, New York, marked his first as president to an area he won in 2016.