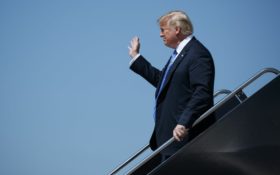 During Tuesday’s debate, President Donald Trump was asked to defend his record with African-Americans during his time in the White House.

His go-to phrase has become a staple of his re-election campaign: a record low in Black unemployment during his administration.

It’s a simple message. But behind the soundbites, it seems that real initiatives are taking place inside his campaign.

It’s no wonder then, that his preparation is paying off with some surprising public endorsements — and his latest happens to be a disaffected Democrat.

Ohio state Rep. Bernadine Kennedy Kent went public with her support of the president after being alienated from her own party. According to Cincinnati.com, she and her husband met with the president ahead of the Tuesday debate showdown after a press release stating her support.

“We all recognize that gainful employment and economic development is the best deterrent against violence and social unrest,” she wrote as on official endorsement, “so I want to thank President Trump for his commitment to ensuring the success of the Black community in every way.”

“Furthermore, I am honored to share with people my intent to vote for him and spread the word on the value of his leadership and his dedication to the American people.”

“…Not only am I Black, I am a proud American & delighted to endorse President Trump for re-election.  Furthermore, I am honored to share with people my intent to vote for…” @REPBKKENT #PlatinumPlan pic.twitter.com/QaQbI1DoKf

Kennedy Kent called Biden “divisive,” citing perhaps his most famous recent gaffe when he said that African-Americans who are still on the fence about voting for Biden over Trump “ain’t black.”

It was a bad soundbite that Biden likely wants back.

Because that mistake led at least one Democrat to the other side of the aisle.

According to The Columbus Dispatch though, Kennedy Kent had been alienated by the Democratic Party for quite some time. In 2018 her so-called constituents voted her out of their Ohio caucus for sending an unauthorized public records request to the Columbus, Ohio mayor.

Kennedy Kent most notably follows in the footsteps of Vernon Jones, a lifelong Democrat who expressed public support for Trump at the Republican National Convention. Throughout his first year, Trump has tried — with various degrees of success — to win over Black voters.

The reality is that a Republican nominee — no matter who it is — will likely never score the majority of minority votes across America.

But if Trump’s campaign is successful in peeling off just 10 points of Black voters that historically back Democratic candidates, it could cause quite a November surprise.

And it would mean a landslide against Biden.