Trump defiant: "The wall is the wall" - The Horn News 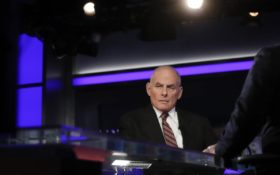 President Donald Trump insisted Thursday his views on a border wall with Mexico have not evolved, pushing back against outside reports.

Trump said on Twitter: “The Wall is the Wall, it has never changed or evolved from the first day I conceived of it.”

Some Democrats claim White House chief of staff John Kelly said on Wednesday that parts of the border don’t need a wall — and that Trump didn’t know that when making campaign promises.

Trump tweeted Thursday that some of the wall will be “see through,” and he wrote that the wall was never supposed to be built where there are natural barriers. He added that it “will be paid for, directly or indirectly, or through longer term reimbursement, by Mexico, which has a ridiculous $71 billion dollar trade surplus with the U.S.”

The Wall is the Wall, it has never changed or evolved from the first day I conceived of it. Parts will be, of necessity, see through and it was never intended to be built in areas where there is natural protection such as mountains, wastelands or tough rivers or water…..

….The Wall will be paid for, directly or indirectly, or through longer term reimbursement, by Mexico, which has a ridiculous $71 billion dollar trade surplus with the U.S. The $20 billion dollar Wall is “peanuts” compared to what Mexico makes from the U.S. NAFTA is a bad joke!

Kelly’s assertion that Trump’s views on immigration had evolved came as lawmakers try to reach accord on protecting hundreds of thousands of illegal immigrants from deportation, a push the White House and Republicans say they would back, if it’s coupled with tough border security measures and other restrictions.

Trump tweeted Thursday, “If there is no Wall, there is no Deal!” He said the U.S. needs a wall “to help stop the massive inflow of drugs from Mexico, now rated the number one most dangerous country in the world.”

Kelly said on Fox he told the caucus that “they all say things during the course of campaigns that may or may not be fully informed.” He said Trump has “very definitely changed his attitude” toward protecting young illegal immigrants, “and even the wall, once we briefed him.”

“So he has evolved in the way he’s looked at things,” Kelly said. “Campaign to governing are two different things and this president has been very, very flexible in terms of what is within the realms of the possible.”

Supporters of Trump openly acknowledge the difference between campaign promises and governing.

And White House officials have repeatedly said it doesn’t have to be a concrete wall from coast to coast but could include large stretches of fencing, technology or other systems.

Trump ended the legal shields on “Dreamers” last year and gave Congress until March to renew them.

Another group of high-level lawmakers has also started talks aimed at brokering an immigration deal, adding an additional level of uncertainty.

Kelly said on Fox that “there’s no doubt in my mind there’s going to be a deal” protecting the Dreamers.

His comments underscored the problems GOP leaders face in winning congressional passage of that legislation. The bill would keep agencies open until mid-February and finance a popular children’s health insurance program for a year.

Democrats’ votes are needed to advance the stopgap measure through the Senate. It’s even unclear whether GOP leaders have nailed down enough votes to prevail in the House, where conservatives and strong boosters of the Pentagon have been unhappy.

Conservative leader Rep. Mark Meadows, R-N.C., said he wants GOP leaders to add additional defense money. But he said he was pessimistic leaders would grant other conservative-backed ideas, such as the promise of a vote on a more conservative immigration bill authored by Judiciary Committee Chairman Robert Goodlatte, R-Va.