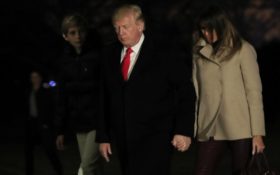 The glamour of his holiday break behind him, President Donald Trump returned to the White House on Monday night to face a hefty legislative to-do list, critical midterm elections and perilous threats abroad.

Trump started his second year in Washington after a lengthy sojourn at his private club in Palm Beach, Florida, capped by a New Year’s Eve bash. Before his departure for the capital, he fired angry tweets at Iran and Pakistan, slamming Islamabad for “lies & deceit” and saying the country had played U.S. leaders for “fools,” a reference to frustrations that Pakistan isn’t doing enough to control militants.

Pakistani Foreign Minister Khawaja Asif tweeted that his government was preparing a response that “will let the world know the truth.”

Meantime, North Korean leader Kim Jong Un said Monday the United States should be aware that his country’s nuclear forces are now a reality, not a future threat. To that, Trump only said: “We’ll see.”

The president is hoping for more legislative achievements after his pre-Christmas success on taxes. He plans to host Senate Majority Leader Mitch McConnell of Kentucky and House Speaker Paul Ryan of Wisconsin at Camp David next weekend to map out the 2018 legislative agenda.

Republicans are eager to make progress before attention shifts to the midterm elections. The GOP wants to hold House and Senate majorities in 2018, but must contend with Trump’s historic unpopularity and some recent Democratic wins.

The president concluded 2017 with his first major legislative achievement — a law to cut taxes, beginning this year, for corporations and individuals at an estimated cost of $1.5 trillion added to the national debt over 10 years. The tax overhaul also will end the requirement, in 2019, that all Americans buy health insurance or pay a fine. That’s a key component of the Obama-era health law that that Republicans have been unable to repeal; other features of the law remain intact.

The White House has said Trump will come forward with his long-awaited infrastructure plan in January. Trump has also said he wants to overhaul welfare and recently predicted Democrats and Republicans will “eventually come together” to develop a new health care plan.

Ryan has talked about overhauling Medicaid and Medicare and other safety-net programs, but McConnell has signaled an unwillingness to go that route unless there’s Democratic support for any changes. Republicans will have just a 51-49 Senate majority — well shy of the 60 votes needed to pass most bills — giving leverage to Democrats.

Congress also has to deal with a backlog from 2017. It must agree on a spending bill by Jan. 19 to avert a partial government shutdown.

Lawmakers also have unfinished business on additional aid to for hurricane victims, lifting the debt ceiling, extending a children’s health insurance program and extending protections for immigrants brought to the U.S. illegally as children. Trump has said he wants money for a border wall in exchange for protecting those immigrants.

Trump spent his last day in Florida discussing Pakistan, he said: “The United States has foolishly given Pakistan more than 33 billion dollars in aid over the last 15 years, and they have given us nothing but lies & deceit, thinking of our leaders as fools. They give safe haven to the terrorists we hunt in Afghanistan, with little help. No more!”

It was not immediately clear why the president decided to comment on Pakistan. The U.S. has long accused Islamabad of allowing militants to operate relatively freely in Pakistan’s border regions to carry out operations in neighboring Afghanistan. In August, the United States said it would hold up $255 million in military assistance for Pakistan until it cracks down on extremists threatening Afghanistan.

On Iran, Trump kept up his drumbeat in support of widespread anti-government protests there. He tweeted Monday that Iran is “failing at every level” and it is “TIME FOR CHANGE.”

While some Iranians have shared Trump’s tweets, many distrust him as he’s refused to re-certify the nuclear deal that eased sanctions on the country and because his travel bans have blocked Iranians from getting U.S. visas.