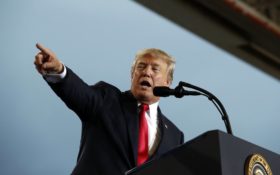 President Donald Trump’s re-election campaign released a provocative new ad accusing Democrats of being “complicit” in the slayings of law enforcement officers by people in the U.S. illegally.

The 30-second ad was released Saturday on the anniversary of Trump’s inauguration and amid a government shutdown. Democrats are refusing to support a spending plan unless Republicans agree to a deal to protect some 700,000 immigrants known as “Dreamers” from deportation.

The ad touts Trump’s pledge to build a border wall and to strengthen border security.

“Democrats who stand in our way will be complicit in every murder committed by illegal immigrants,” the ad said.

Independent Vermont Sen. Bernie Sanders called the spot “really unbelievable and so sad for our country,” in an interview with CNN’s “State of the Union.”

Speaker of the House Paul Ryan told CBS’ “Face the Nation” Sunday that “I don’t know if that’s necessarily productive.”

The ad features Luis Bracamontes, who is in the U.S. illegally and allegedly killed two Northern California sheriff’s deputies in an October 2014 rampage. Bracamontes’ violent court outbursts have included regrets that he did not harm more officers.

The ad closes with a recorded endorsement by Trump.