Trump to release his Supreme Court picks - The Horn News 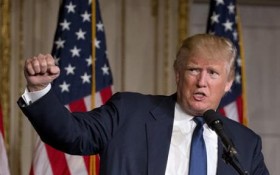 Republican presidential front-runner Donald Trump says he’s planning to release a list of judges that he would select from to fill Supreme Court vacancies if he’s elected president in an effort to ease concerns about his picks.

“I am going to give a list of either five or 10 judges that I will pick, 100 percent pick, that I will put in for nomination. Because some of the people that are against me say: ‘We don’t know if he’s going to pick the right judge. Supposing he picks a liberal judge or supposing he picks a pro-choice judge,'” Trump told a local gathering of Republicans in Palm Beach, Florida Sunday night.

He says the list would include judges “that everybody respects, likes and totally admires” — “great conservative judges, great intellects, the people that you want.”

“I will guarantee that those are going to be the first judges that I put up for nomination if I win. And that should solve that problem,” he said.

Trump aides did not immediately respond to questions about when he might release the names.

But the vow marks a rare moment of acknowledgement by Trump that he could be doing more to appease the many leaders in his party who still oppose his candidacy. While Trump has been amassing delegates, he remains deeply unpopular with many establishment Republicans who question his electability in the general election as well as his conservative credentials.

Trump, who has come under growing scrutiny for the violence that has become increasingly frequent at his rallies, also praised a supporter who kicked and punched a protester at a rally in Tucson Saturday, calling him “wonderful” and a “very fine guy.”

The protester, who had been a carrying a sign with an image of a Confederate flag over an image of Trump, was assaulted by an African-American man while being led out by security. Another protester had been wearing a Ku Klux Klan-style sheet.

Earlier Sunday, in a phone interview on ABC’s “This Week,” Trump accused the press of having a double standard when it comes to covering his events, criticizing supporters for committing violence while not holding protesters who block roads or hold signs with profanities to account.

“Let me just tell you, it’s a very unfair double standard,” he said.

Trump also spoke about President Barack Obama’s historic visit to Cuba, criticizing him because Cuban president Raúl Castro did not greet his plane at the airport.

“Honestly, Obama should have turned the plane around and left,” said Trump. “He should have said, ‘Bye bye!'”

The billionaire businessman hosted the Palm Beach County Republican Party’s Lincoln Day dinner in a glittering ballroom at his Mar-a-Lago club. Trump’s appearance ended with Trump and former rival Ben Carson on stage, swaying along to a rendition of “Stand by Me” by singer Beau Davidson.