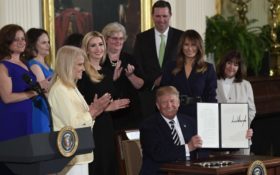 President Donald Trump signed an executive order Wednesday to promote the hiring of military spouses by the federal government.

Trump signed the order at a Mother’s Day event at the White House that recognized the contributions of military mothers and spouses. Trump said military spouses too often don’t get the recognition they deserve for enduring long separations during deployments, multiple family relocations and keeping their households running and the family’s spirit high.

The president said America owes them a debt of gratitude that can’t ever be fully repaid.

“We know what you do, and your spouse knows what you do,” said Trump, joined by his wife, Melania. “We can never repay you for that, but we can and we will give you the opportunities you deserve.”

The order requires federal agencies to promote “to the greatest extent possible” the use of noncompetitive hiring authority that exists for military spouses, meaning they don’t have to compete for certain jobs. It directs the federal personnel office to educate agencies on the use of their noncompetitive hiring authority, and to raise awareness among military spouses.

Agencies are also asked to recommend ways to improve “license portability” so that spouses in professions that require licensing don’t have to get new credentials when they move from state to state.

A report released Wednesday by the president’s Council of Economic Advisers said military spouses also suffer financial disadvantages because of their frequent moves and other sacrifices. They earn at least $12,000 a year less than other workers as a results, which adds up to estimated losses of nearly $190,000 over a 20-year military career, the report said.

The first lady, who introduced the president and is the mother of their 12-year old son, Barron, showed off a humorous side.

“Mother’s Day, which is this Sunday, is celebrated just one time per year. I don’t know about all of you, but I think mothers should be celebrated each and every day,” she said, prompting applause from audience members, many of whom wore military uniforms.