Trump prepares to travel to Houston - The Horn News 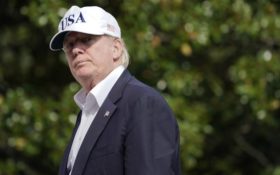 President Donald Trump on Monday prepared to visit Texas to view the federal government’s response to Harvey’s devastating flooding as his administration vowed to help the millions of residents dealing with the catastrophic storm.

Harvey represented the first major natural disaster of Trump’s presidency, and it viewed by some as a test of his competency to handle such a situation.

Vice President Mike Pence said in a series of radio interviews on Monday that the Trump administration would “be there for the long haul to help rebuild Texas and all the affected areas from Hurricane Harvey.”

“The president has been continuously engaged in this. We’ve all been deeply concerned by the impact of this storm,” Pence told KTRH radio in Houston. “We’re saddened by the loss of life and the president is anxious to come to the region.”

Trump spent most of the weekend at the presidential retreat at Camp David, Maryland, and convened his Cabinet by telephone during the weekend. He tweeted on Sunday a promise of a Texas visit “as soon as that trip can be made without causing disruption” — later announced by the White House as Tuesday. Details on the president’s itinerary were not yet immediately available.

But by traveling to the region just days after Harvey made landfall, the president raised questions among his critics on whether his presence would complicate efforts by emergency responders to help Texans still in need.

Texas Gov. Greg Abbott, a Republican and Trump ally, however, loaded heavy praise on the president and the federal government, describing it as an “A-plus” effort.

“I’ve got to tell you, I give FEMA a grade of A+, all the way from the president down,” Abbott said. “I’ve spoken to the president several times, to his Cabinet members, such as secretary of homeland security, such as the administrator of FEMA, such as Tom Price, the secretary of health and human services.”

The devastating storm has dumped more than two feet of rain, sending thousands of people in Houston to rooftops for rescue and prompting a warning from Federal Emergency Management Agency director Brock Long of a “landmark event” that could require years to get damaged areas back on track.

Harvey made landfall along the Gulf Coast on Friday night as a Category 4 storm near Corpus Christi, and moved northeast along the Texas coast over Houston. Abbott said he expected heavy rain “for days to come.”

The governor commended Trump for being “extremely professional, very helpful” in moving quickly to grant his request Friday for an immediate disaster declaration, which triggers additional federal assistance to aggrieved areas.

Abbott said the focus was on rescue in the Houston area, citing multiple high-level vehicles sent in late Saturday night that were being manned by the National Guard, but that boats and helicopters will be available all across east Texas for swift water rescue. Still, in many areas, Houston officials were reporting flooding so widespread that rescuers were getting too many calls to respond to each one and had to prioritize life-and-death situations.

In his tweets, Trump praised Federal Emergency Management Agency Administrator Brock Long for “doing a great job” and touted the “great coordination between agencies at all levels of government.” He also tweeted Sunday morning about his Cabinet meeting to address Harvey. The Department of Homeland Security, which oversees FEMA, is currently without a secretary.

The Trump administration efforts seek to offer a contrast to President George W. Bush’s response to Hurricane Katrina, which hit New Orleans in August 2005 and left more than 1,500 dead. The mismanaged response of Bush’s FEMA administrator, Michael Brown, to that hurricane, as well as Bush’s praise of Brown for doing a “heck of a job” in the immediate days after, dogged Bush for the rest of his presidency.

Abbott spoke on ABC’s “This Week” and “Fox News Sunday,” and Long appeared on CNN’s “State of the Union” and NBC’s “Meet the Press.”