Trump: My plans for North Korea are secret - The Horn News 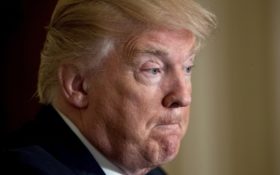 As tensions with North Korea continue to escalate, President Donald Trump has recognized the foolishness behind revealing upcoming military strategies, while simultaneously slamming that very behavior in his Democratic predecessors.

In an interview on Fox News’ “The O’Reilly Factor,” Trump stuck to his word, saying, “We’ll see what happens but I just don’t telegraph my moves.”

The President has said time and time again that his administration will not be one that alerts foreign nations to his upcoming actions, unlike former President Barack Obama.

“I am not like other administrations, where they say, we are going to so this in four weeks. It doesn’t work that way. We’ll see what happens.”

“I hope things work out well, I hope there is going to be peace. They have been talking with this gentleman (North Korean President Kim Jong Un) for a long time. You read (Former President Bill) Clinton’s book, he said we made such a great peace deal, and it was a joke. You look at different things over the years with President (Barack) Obama – everybody – he has been outplayed.”

While never revealing specific strategies to come, Trump’s administration has made it clear that America will not be weak on North Korea.

Vice President Mike Pence was in Japan Tuesday, declaring, “We will not rest and will not relent until we obtain the objective of a denuclearized Korean Peninsula.”

He continued, warning Un that this administration is different and, “the era of strategic patience is over.”

After 25 years of trying to deal patiently with North Korea’s nuclear and missile ambitions, Pence said, “all options are on the table” to deal with threat.

North Korea’s deputy U.N. ambassador accused the United States on Monday of turning the Korean Peninsula into “the world’s biggest hotspot” and creating “a dangerous situation in which a thermonuclear war may break out at any moment.”

Kim In Ryong told a news conference that “if the U.S. dares opt for a military action,” North Korea “is ready to react to any mode of war desired by the U.S.”

There is no doubt tensions are high and the future relationship between North Korea and the U.S. is currently a mystery.

But one thing is certain: As long as Trump is in office, our enemies will be kept in the dark on upcoming U.S. actions… until it’s too late.