Trump plans to give each American taxpayer $4,000 - The Horn News 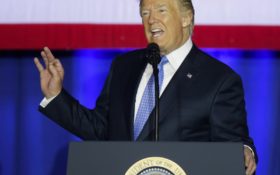 President Donald Trump’s new tax plan could be the most generous in decades. Trump told truckers in Harrisburg last week his new tax plan will put $4,000 into the pockets of average wage earners.

That’s forty $100 dollar bills transferred from the bloated Washington, D.C. swamp and put straight in the pocket of nearly every American.

It’s a metaphor Trump is using to aggressively push his tax reform goals and pressure the do-nothing Congress to get meaningful reform passed.

Trump’s historic plan includes doubling of the standard tax deduction, historic cuts to the corporate income tax from, 35% to 20%, elimination of the “death tax”, simplification of the tax code, and returning of profits held overseas to the United States at a one-time tax rate of 10%.

For the first time in recent history, America has a tax plan, created by a businessman that may benefit middle-class families in a real way.

Predictably, Democrats are pushing the narrative that the Republican tax plan will only benefit the upper middle class and the top 1% of wage owners. And you know what? Democrats would be right about that! Benefiting from tax cuts when you don’t pay any would be extremely difficult to do, and this is the point. Middle and higher wage earners in the United States pay 90% of the Federal Income taxes… and its time they got a break.

Some are pushing back on the Republican side, including the usual suspect Bob Corker, who has recently been feuding with Trump on Twitter.

But Trump and Senate Majority Leader Mitch McConnell gave a presser in the White House Rose Garden yesterday, where they reaffirmed their commitment to work together to get the historic tax law passed.