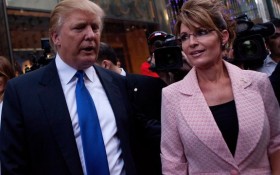 Former Alaska Gov. Sarah Palin has been a long-time supporter of President-elect Donald Trump – and she may be rewarded with a cabinet position.

Trump has been releasing new cabinet position picks like rapid fire, but there’s one, hugely important position that he has yet to reveal.

Numerous names have been considered for the secretary of Veterans Affairs, but Americans are still left wondering who will take on the responsibility of the post.

In his typical, unpredictable fashion, President-elect Donald Trump just added a new, yet familiar face to the running for VA Secretary.

Former 2008 vice presidential candidate Sarah Palin is joining the competition to take on the role of reforming the VA, a close Palin aide and a Trump official told ABC News.

We should be grateful we'll soon have a commander-in-chief who will champion our vets and honor the promises our… https://t.co/lb5wdrlrWu

She praised Trump, calling him “a president who promised to drain the swamp and clean up all government corruption, all things our vets and active duty troops deserve.”

While Palin would be the first non-veteran to hold the post, she has a close relationship with veterans. Her son Track served in Iraq in 2008 and her son-in-law Dakota Meyer is a Medal of Honor recipient. Palin has expressed her views on what needs to be done to reform the VA, saying veterans need improved healthcare and help returning to the workforce.

Palin has been consistently loyal to Trump throughout his candidacy and is a close friend with Trump’s campaign strategist Steve Bannon. In fact, it has been rumored that before Trump, Bannon wanted Palin to run for president.  Politico reported, “Bannon openly fantasized about transforming the former governor of Alaska into the very kind of norm-defying outsider that Trump, with Bannon’s help, would ultimately prove to be.”

Having an ally so close to Trump could prove to be a major leg up on the competition for Palin.

Battling her for the post is former Massachusetts Senator Scott Brown, who met with Trump November 21st to discuss, “veterans and veterans’ issues,” according to Brown. He was a member of the Army National Guard for 35 years, reaching the rank of colonel.

When asked about the consideration of Palin, Brown said, “He’s going to make a decision based on everybody’s resume and what they bring to the table. I’m available if he needs me. If he doesn’t, I’m good with that, too.”

Another candidate for the position is Florida Representative Jeff Miller, previous chairman of the House Committee on Veteran Affairs.

Even if Palin isn’t chosen for the VA post, her loyalty to Trump will still likely be rewarded. She has been reportedly considered for energy secretary and secretary of the interior.

The VA is the largest department of the United States government, and acting as its secretary is no small feat.

Do you think Palin could handle it? Comment below with your opinion.