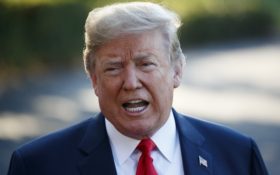 President Donald Trump has pardoned two ranchers whose case sparked the armed occupation of a national wildlife refuge in Oregon.

Dwight and Steven Hammond were convicted in 2012 of intentionally and maliciously setting fires on public lands. The arson crime carried a minimum prison sentence of five years, but a sympathetic federal judge, on his last day before retirement, decided the penalty was too stiff and gave the father and son much lighter prison terms.

Prosecutors won an appeal and the Hammonds were resentenced in October 2015 to serve the mandatory minimum.

The decision sparked a protest from Ammon Bundy and dozens of others, who occupied the Malheur National Wildlife Refuge near the Hammond ranch in southeastern Oregon from Jan. 2 to Feb. 11, 2016, complaining the Hammonds were victims of federal overreach.

The armed occupiers changed the refuge’s name to the Harney County Resource Center, reflecting their belief that the federal government has only a very limited right to own property within a state’s borders.

“The Hammonds are devoted family men, respected contributors to their local community, and have widespread support from their neighbors, local law enforcement, and farmers and ranchers across the West,” she said. “Justice is overdue for Dwight and Steven Hammond, both of whom are entirely deserving of these Grants of Executive Clemency.”

The pardons are the latest in a growing list of clemency actions by Trump, who has been using his pardon power with increasingly frequency in recent months.

Aides say that Trump has been especially drawn to cases in which he believes the prosecution may have been politically motivated — a situation that may remind him of his own position at the center of the ongoing special counsel investigation into Russian election meddling.