Trump on illegals: Send ‘em back! - The Horn News 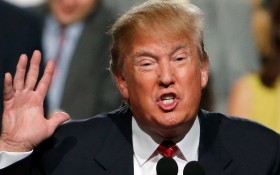 GOP Presidential candidate Donald Trump is getting more specific with his tough policy on immigration. He says he wants to send all illegals back, and give no amnesty to them or their children. To make that happen, he’d have to re-write the Constitution’s 14th amendment.

Native-born children of immigrants — even those living illegally in the U.S. — have been automatically considered American citizens since the adoption of the 14th Amendment of the Constitution in 1868.

The Associated Press is reporting that Trump wants to deny citizenship to the babies of immigrants living in the U.S. illegally as part of an immigration plan that emphasizes border security and deportation for millions.

Trump described his expanded vision of how to secure American borders during a wide-ranging interview Sunday on NBC’s “Meet The Press,” saying that he would push to end the constitutionally protected citizenship rights of children of any family living illegally inside the U.S.

“They have to go,” Trump said, adding: “What they’re doing, they’re having a baby. And then all of a sudden, nobody knows … the baby’s here.”

The odds of repealing the amendment’s citizenship clause would be steep, requiring the votes of two-thirds of both houses of Congress and support from three-fourths of the nation’s state legislatures. Republicans in Congress have repeatedly failed since 2011 to pass bills aimed at ending “birthright citizenship.” Some conservatives believe that the granting of citizenship in such cases could be changed without amending the Constitution.

“They’re illegal,” Trump said, describing native-born children of people living illegally in the US. “You either have a country or not.”

“We have to make a whole new set of standards,” Trump said. “And when people come in, they have to come in legally.”