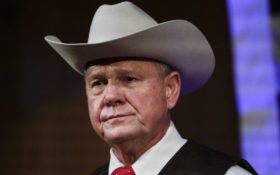 President Donald Trump officially endorsed embattled Republican Roy Moore in the Alabama Senate race on Monday, dismissing mainstream media allegations against the GOP candidate and arguing that his vote is needed in Congress.

Democrats refusal to give even one vote for massive Tax Cuts is why we need Republican Roy Moore to win in Alabama. We need his vote on stopping crime, illegal immigration, Border Wall, Military, Pro Life, V.A., Judges 2nd Amendment and more. No to Jones, a Pelosi/Schumer Puppet!

It was Trump’s strongest endorsement of Moore since allegations surfaced.

The America First agenda will #MAGA. Can't wait to help him #DrainTheSwamp.#ALSEN https://t.co/pYu9h7TYVN

Putting Pelosi/Schumer Liberal Puppet Jones into office in Alabama would hurt our great Republican Agenda of low on taxes, tough on crime, strong on military and borders…& so much more. Look at your 401-k’s since Election. Highest Stock Market EVER! Jobs are roaring back!

Trump has agreed to headline a campaign-style rally in Pensacola, Florida — less than 20 miles from the Alabama border — just four days before the Alabama election.

White House legislative director Marc Short told CNN that Trump was “making the case to the people of Alabama that it’s a factor to consider that not one Democrat has been able to find time to say they support” the GOP tax plan.

Short said Trump’s point is that “when allegations arise 38 years later, when Roy Moore has been a very public figure for those 38 years, he’s run multiple times statewide in Alabama, the people in Alabama have an opportunity to choose and make some decisions about Roy Moore’s character. Putting all that together, he’s encouraging the people of Alabama to make the right decision.”