Trump: Obama administration is threatening my life - The Horn News 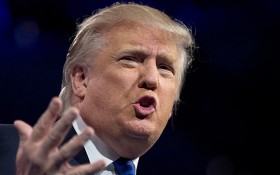 Despite drawing massive crowds and having a $100 million bounty on his head from a Mexican drug lord, billionaire presidential candidate Donald Trump has not been given the Secret Service protection he’s requested from the Obama Administration.

And Obama’s indifference could be putting the GOP front-runner, who is currently paying for his own security, in harm’s way.

In an interview with The Hill, Trump pointed that he’s attracted huge crowds, just like Barack Obama did as a presidential candidate during the 2008 election cycle. And by this point in that cycle, Obama had Secret Service protection.

Obama was placed under Secret Service protection in May 2007, the earliest ever for a presidential candidate. The reason? Large crowds and security threats, just like Trump is currently facing.

“Personally, I think if Obama were doing as well as me he would’ve had Secret Service [earlier]. I have by far the biggest crowds.” Trump said in the interview.

And Hillary Clinton, as a former First Lady, had a Secret Service detail for the entirety of both the 2008 and 2016 campaigns.

No word has emerged from the Secret Service on when, or if, they’ll provide Trump protection.

“They’re in no rush because I’m a Republican. They don’t give a sh*t,” Trump said jokingly during his interview.

Federal law allows candidates to seek protection if they meet a series of standards, including public prominence as measured by polls and fundraising.