Trump: NBC and Comcast execs must be fired! - The Horn News 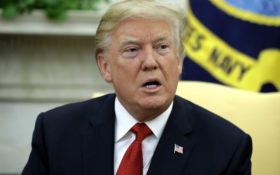 President Donald Trump is responding to the termination of “Today” show host Matt Lauer, saying executives at NBC and Comcast should be “fired for putting out so much Fake News.”

On Twitter Wednesday, Trump says “Wow, Matt Lauer was just fired from NBC for ‘inappropriate sexual behavior in the workplace.’ But when will the top executives at NBC & Comcast be fired for putting out so much Fake News.”

Trump then cited the NBC News chairman adding: “Check out Andy Lack’s past!” It was not immediately clear what that comment referred to.

NBC announced Wednesday that it had terminated Lauer for inappropriate behavior at workplace. Lauer’s co-host Savannah Guthrie made the announcement at the top of Wednesday’s “Today” show.