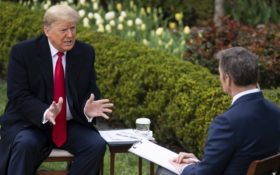 Democratic nominee Joe Biden is just days away from picking his running mate.

There’s no debate that the decision will impact the November election.

But however important the choice is for Biden and the Democrats, it’s equally as crucial for President Donald Trump.

Many names have been floated, but Sandy Fitzgerald of Newsmax writes that if the President had his way he would personally pick Susan Rice as Biden’s running mate.

Rice was the former national security adviser for President Barack Obama during the Benghazi fiasco — and an alleged Deep State enabler who was involved in spying on Trump campaign officials.

Fitzgerald writes that Rice would rekindle the spark in Trump voters — a passion that some pundits think have vanished from Republican circles. The hatred of Biden isn’t fanning the flames the way Hillary seemed to in 2016.

She’s long-been a Washington, D.C. partisan insider, who was even accused of covering up Hillary Clinton’s Benghazi attack lies.

Not only is Rice seasoned, but her close relationship with Biden (forged during he Obama years) is perhaps the reason that she’s rumored to be one of the last two standing options for Vice President.

Fox News contributor Jason Chaffetz also said he couldn’t think of any other Biden running mate “more polarizing who would fire up the base.”

Biden has a difficult decision to make in Rice.

If he chooses the Obama insider, he’d be setting her up for attacks in the national spotlight, serving her up on a silver platter Trump and Vice President Mike Pence.

Because once the Biden campaign announces the pick, the Trump campaign will get right to work on opposition research  — but with Rice, their work is already done.