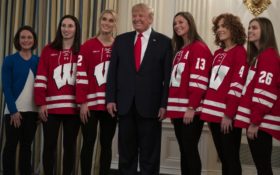 Sponsored] The Best Fruit for Fat-Burning

Elise Gout, a member of Columbia University’s 2019 championship fencing team, said she and three of her teammates had hoped to present Trump with the letter arguing that Trump has “perpetuated a culture that conditions women and minority gender identities to be silent — to sacrifice the space they have every right to take up.”

But Gout said the athletes were told by a Trump aide that they could not bring the letter with them during their brief meeting with Trump in the East Room of the White House. The letter stated it only represented the views of the four signatories, fencers who competed on the 2019 championship team and graduated earlier this year, and not Columbia University or the fencing team.

White House spokesman Judd Deere said the Columbia fencers’ visit with Trump was cordial, and White House staff extended an invitation for the athletes and coach to come back to the White House at a later date to discuss any policy concerns they have.

Some athletes, including members of the World Cup-winning women’s national soccer team and Sean Doolittle from the World Series champion Washington Nationals, have declined the White House invitations from Trump. Others, like the NBA’s Golden State Warriors and the NFL’s Philadelphia Eagles, have been disinvited after players criticized the president.

Others have warmly embraced Trump.

The Columbia athletes’ letter criticized the administration for proposing changes to federal rules that would affect campus sexual assault survivors and for implementing new regulations that prohibit groups that receive federal grants from referring patients for abortion.

Trump, an avid golfer, spent a few moments with each team Friday, but he lingered a little bit longer with Stanford University’s men’s golf team. He invited all the champs to come take a peek at the Oval Office.

“So far, nobody’s turned that one down,” Trump joked.