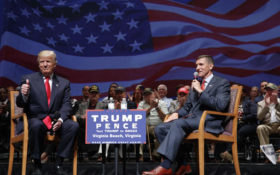 President-elect Donald Trump is planning to meet with his incoming national security adviser in the aftermath of a rattling day of violence around the world.

Trump blamed Islamic terrorists for deadly incidents Monday in Turkey and Germany and vowed anew to eradicate their regional and global networks. He called the brazen shooting of Russia’s ambassador to Turkey “a violation of all rules of civilized order.” He added that a “radical Islamic terrorist” had assassinated the diplomat, Andrei Karlov.

Turkish authorities identified the gunman as Mevlut Mert Altintas, a member of Ankara’s riot police squad, and said he was later killed in a shootout with police. Altintas shouted in Turkish about the Syrian city of Aleppo and also yelled “Allahu akbar,” Arabic for “God is great.”

As for Berlin, where at least 12 people were killed and nearly 50 hurt when a truck plowed through a Christmas market, Trump said the Islamic State group “and other Islamist terrorists continually slaughter Christians in their communities and places of worship as part of their global jihad.” A man held by German authorities after the violence was later released after a lack of evidence to connect him to the incident.

Trump’s meeting scheduled Wednesday with retired Lt. Gen. Michael Flynn will come a day after Flynn and several other members of the incoming national security team met with Vice President-elect Mike Pence in Washington. Aides said the meeting was planned before the acts of violence, though they were discussed.

The gathering with Pence included retired Gen. John Kelly, Trump’s nominee for head of the Department of Homeland Security; retired Gen. James Mattis, the pick for defense secretary; and Rex Tillerson, the head of Exxon Mobil and the intended nominee for secretary of state.

While Trump has assembled his Cabinet at a quick pace, the process to fill out top White House jobs has been slowed by infighting among advisers. Some of Trump’s earliest advisers have expressed concern to the president-elect himself that they are getting boxed out in favor of those more closely aligned with incoming chief of staff Reince Priebus, who has chaired the Republican National Committee.

Among those whose future is still in flux is Corey Lewandowski, Trump’s controversial first campaign manager who was fired after clashing with the president-elect’s family. On Monday, Lewandowski met with Jared Kushner, Trump’s influential son-in-law, and could still be offered a job in the administration, though potentially one that would keep him out of the West Wing — and away from the president.

The president-elect’s transition team has said it expects to announce some White House positions in the coming days.

Trump met Tuesday with candidates for his unfilled Cabinet positions, including prospective hires to run the Department of Veterans Affairs, a beleaguered agency that the Republican businessman has vowed to overhaul.

At Mar-a-Lago, Trump’s palatial Florida estate, the president-elect met with Luis Quinonez, who runs a company with military and health care ties and is said to be under consideration for VA secretary. He also interviewed Toby Cosgrove, the CEO of the Cleveland Clinic, who was a top contender to replace Eric Shinseki when he resigned from the VA in 2014. Cosgrove later withdrew from consideration.

Trump repeatedly pledged during the campaign to fix the woes at the department and said he would “take care of great veterans.” But he also came under scrutiny for being slow in paying out money raised for veterans groups and for suggesting that “strong” veterans don’t need treatment for mental health problems.

Others said to be considered for the post include former Massachusetts Sen. Scott Brown, Florida Rep. Jeff Miller and Pete Hegseth, an Army veteran and former CEO of Concerned Veterans for America.

Trump is also considering Jovita Carranza, who worked in President George W. Bush’s administration, as his choice for U.S. trade representative. She served as deputy administrator of the Small Business Administration under Bush.

With just a handful of Cabinet posts to fill, Trump is facing some criticism for a lack of diversity in his senior team, which currently includes no Hispanics. The National Association of Latino Elected and Appointed Officials said Tuesday that it was “deeply concerned” at the lack of Hispanics considered for top jobs. Carranza was a member of Trump’s Hispanic advisory council during the campaign.

Pence, meanwhile, met in Washington with former Texas state official Susan Combs, who served both as state agriculture commissioner and comptroller. Trump also needs to fill the Agriculture Department slot. Transition officials did not immediately confirm if Combs is up for that post.