After decades of U.S. effort, Trump may witness Mugabe's exit - The Horn News 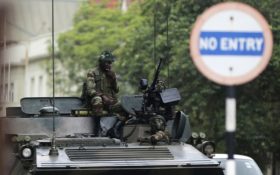 Without lifting a finger, the Trump administration may be witnessing the culmination of nearly two decades of U.S. efforts to pry Zimbabwe from the powerful grasp of its authoritarian President Robert Mugabe. Yet with Mugabe’s fate and Zimbabwe’s political future in limbo, neither Trump nor previous administrations can claim credit or celebrate.

The past three American leaders have actively and outspokenly sought to isolate Mugabe and his ruling clique for human rights abuses, hoping to encourage a democratic transition. Since January, however, it’s been virtual crickets. Now the 93-year-old is under house arrest with his rule nearing an end, a victim not of U.S. and Western pressure but of domestic infighting.

After staying silent through the first day of Zimbabwe’s possible coup with the exception of warning American citizens there, Trump’s State Department weighed in Wednesday by voicing concern about the military’s actions.

The department urged Zimbabwe’s leaders “to exercise restraint, respect the rule of law and uphold the constitutionally-protected rights of all citizens.” It encouraged leaders “to quickly resolve differences to allow for a rapid return to normalcy.” The U.S. does not take sides in Zimbabwe’s internal politics, it said, while stressing that it also “does not condone military intervention in political processes.”

Mugabe on Thursday was meeting a South African delegation at the state house as negotiations continued for a resolution to the political turmoil. South Africa President Jacob Zuma, speaking in parliament, said the political situation “very shortly will be becoming clear.”

The negotiations unfolded as African foreign ministers gathered in Washington for a regional summit focused largely on democracy and the rule of law. Moussa Faki Mahamat, the chairman of the African Union Commission, wouldn’t say explicitly whether Mugabe should step down, but said nations on the continent were working expeditiously to resolve the crisis.

“We believe we will find a solution which will be within constitutional legality,” the AU leader told The Associated Press on Thursday.

If that indeed translates into Mugabe’s ouster, it’s a result the United States has long hoped for.

In 2003, then-President George W. Bush declared a national state of emergency with respect to Zimbabwe and signed the first of three executive orders he would issue while in office, authorizing sanctions against senior Zimbabwean officials deemed to be undermining democracy. Following national elections in 2008 that Bush called “a sham,” the U.S. took a lead in encouraging a power-sharing arrangement between Mugabe and Zimbabwe’s main opposition leader. When that failed, former Secretary of State Condoleezza Rice said it was “well past time” for Mugabe to leave power.

But for the past 10 months, top U.S. officials have spoken nary a word about Zimbabwe. They’ve imposed no new sanctions. They’ve engaged in no known, behind-the-scenes efforts to escalate pressure on Mugabe or his government.

In fact, until Thursday, the only times the words “Zimbabwe” or “Mugabe” appear to have been used by senior Trump administration officials were in April and in June.

The first time was when the State Department released a three-sentence written statement from Secretary of State Rex Tillerson congratulating the Zimbabwean people on the country’s April 18 independence day. The second was when U.N. envoy Nikki Haley mentioned Zimbabwe and Mugabe in a speech that excoriated the U.N. Human Rights Council for failing to address despotic regimes.

The Trump White House doesn’t seem to have mentioned the country at all in 2017.

The only White House mention of Zimbabwe in 2017 was in the waning days of Obama’s presidency, when he extended the Bush-era state of emergency and sanctions for another year. That decision enabled the U.S. to impose further penalties on Zimbabwe’s leadership. The only action by Trump’s Treasury Department, however, has been to remove two retired officials from the sanctions list.