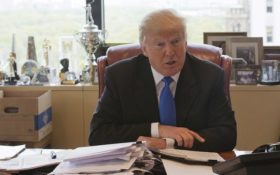 President-elect Donald Trump is quickly filling his cabinet, and it’s a mix of Washington insiders and political outsiders supporters are comparing to President Abraham Lincoln’s famous “team of rivals”

And Trump’s pick for Transportation Secretary has rivals furious — because it’s a minority woman, blowing away critics’ feeble attempts to paint his choices as somehow racist.

Trump announced Tuesday that Elaine Chao was his choice for the Cabinet post. “Secretary Chao’s extensive record of strong leadership and her expertise are invaluable assets in our mission to rebuild our infrastructure in a fiscally responsible manner,” Trump said in a statement released by his campaign.

Chao, 63, was labor secretary under President George W. Bush and the first Asian-American woman to serve in a president’s Cabinet. She also is the wife of Senate Majority Leader Mitch McConnell of Kentucky, which might be of some help if Trump is to fulfill his promise of generating $1 trillion in infrastructure spending.

Her record as secretary of labor suggests she’d have a light hand when it comes to safety regulation as head of the Transportation Department and would seek to shift responsibility from the federal government to states where possible.

Trump also nominated Steven Mnuchin to be the nation’s 77th treasury secretary. He has had a long history as a successful financial executive and a shorter but significant period in a job that ushered him into Trump’s inner circle: head of Trump’s campaign finance operation.

Mnuchin is also a Washington outsider.

As treasury secretary, Mnuchin would be the administration’s chief economic spokesman, serving as a liaison not only to Wall Street but also to global investors, a critical role given the trillions of dollars in treasury bonds owned by foreigners. In addition, it would be his job to sell the new administration’s economic program to Congress.

Mnuchin will also oversee a sprawling bureaucracy that includes the Internal Revenue Service and the agency that issues millions of Social Security and other benefit checks each month. Treasury also runs the agency that wages the financial war on terrorism.

Analysts said Mnuchin’s years of experience on Wall Street and in managing an investment firm gave him real-world skills that likely appealed to Trump, a business executive who has also never served in government.

Not only do Trump’s latest picks not fit with Democrat’s liberal ideals, but they don’t fit into these sore-losers’ desperate narrative that Trump’s picks are a bunch of white supremacists.

Senator Elizabeth Warren argued that instead of draining the swamp, Trump is, “inviting the biggest ugliest swamp monsters in the front door.”

But by ignoring the diversity of Trump’s cabinet picks and accosting them as racists, the Democrats are the ones promoting division at a time when our nation desperately needs unity.