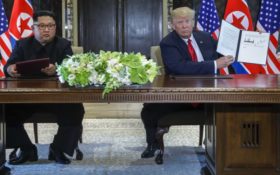 Trump and Kim came together for a summit that seemed unthinkable months ago when the two nations traded nuclear threats. The gathering of the two unpredictable leaders marked a striking gamble by the American president to grant Kim long-sought recognition on the world stage in hopes of ending the North’s nuclear program.

Both leaders expressed optimism throughout roughly five hours of talks, with Trump thanking Kim afterward “for taking the first bold step toward a bright new future for his people.” Kim, for his part, said the leaders had “decided to leave the past behind” and promised: “The world will see a major change.”

The red, white, and blue and the stars of the American and North Korea flags have never been more coordinated. Trump declared success after announcing the Signapore summit resulted in Kim agreeing to work towards complete denuclearization.

Trump also agreed to ending joint military exercises with South Korea. Trump noted that the “war games” would be very “inappropriate” while talks continue. Policy experts note that the next joint military training exercise with South Korea isn’t scheduled until next year, giving negotiators time to work without actually giving a concession.

The formal document-signing, which also included an agreement to work to repatriate remains of prisoners of war and those missing in action from the Korean War.

The documents signed by both leaders, the North Korean said “reaffirmed his firm and unwavering commitment to complete denuclearization of the Korea Peninsula.”

During his press conference, Trump acknowledged that denuclearization won’t happen overnight, but said, “once you start the process it means it’s pretty much over.”

Trump insisted that strong verification of denuclearization would be included in a final agreement, saying it was a detail his team would begin sorting out with the North Koreans next week.

The agreement’s language on North Korea’s nuclear program was similar to what the leaders of North and South Korea came up with at their own summit in April.

Between handshakes, a White House invitation, and even an impromptu tour of “The Beast,” the famed U.S. presidential limousine known for its high-tech fortifications, Trump sought to build a personal connection with Kim and said they have a “very good” relationship.

In their joint statement, the two leaders promised to “build a lasting and stable peace regime” on the Korean Peninsula.

Aware that the eyes of the world were on a moment many people never expected to see, Kim said many of those watching would think it was a scene from a “science fiction movie.”