Trump: Kill terrorists and their families - The Horn News 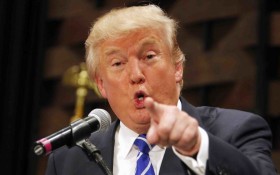 Donald Trump says he has a new plan to take on terror in the Middle East.

He’s going to take the fight to the terrorists’ homes.

That’s not the only foreign policy Trump has been taking on. Trump told the Associated Press this week that if he’s elected president, he’ll know within six months whether he can achieve an elusive peace accord between Israelis and Palestinians, one of the world’s most vexing challenges. But the Republican presidential candidate says he has doubts about each side’s commitment to the peace process.

“I have a real question as to whether or not both sides want to make it,” Trump said in the interview.

The Republican presidential front-runner said his concerns are greater regarding “one side in particular.” While Trump wouldn’t say whether he was referring to the Israelis or the Palestinians, he said the chances for a lasting peace rest with Israel.

“A lot will have to do with Israel and whether or not Israel wants to make the deal — whether or not Israel’s willing to sacrifice certain things,” Trump said. “They may not be, and I understand that, and I’m OK with that. But then you’re just not going to have a deal.”

“If I win, I’ll let you know six months from the time I take office,” he added.

The billionaire businessman who has made his skills as a dealmaker a key piece of his pitch to voters was visibly enthusiastic about the prospect of tackling the intractable foreign policy challenge.

As if to underscore the complexity of the political and policy issue, the normally supremely confident Trump suggested that achieving peace in the Middle East may be the ultimate test of his capabilities as a dealmaker.