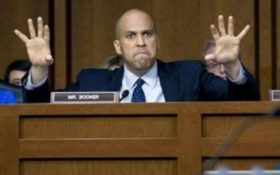 New Jersey Sen. Cory Booker is considered by many to be a top Democratic presidential candidate heading towards 2020 — but before he runs the country, he needs to get control of himself.

After Trump was accused of referring to third-world countries as “sh*tholes”, Booker couldn’t take it… and Tuesday he had an embarrassing public meltdown.

“I hurt!” Booker screamed at Department of Homeland Security Secretary Kirstjen Nielsen during a Senate committee questioning regarding DACA.

“When Dick Durbin called me, I had tears of rage when I heard about his experience in that meeting! And for you to not feel that hurt and that pain, and to dismiss the questions of my colleagues because you’d already answered that line of questioning before,”  Booker continued, waving his hands and pounding the table. “With tens of millions Americans hurting right now because they’re worried about what happened in the White House… that’s unacceptable to me!”

Tears of rage? Over an alleged naughty word being used between elected officials during a tough negotiation behind closed doors? Yikes.

Every day, it seems it’s harder to tell the difference between a U.S. senator and a tired fourth-grader being told to eat their vegetables.

Remember, these are the same senators that never objected to former President Barack Obama blaming our allies for the “sh*t show” African country of Libya.

According to The Atlantic, Obama also used to tell aides, “If only everyone [in the Middle East] could be like the Scandinavians, this would all be easy.”

Did those comments cause Booker to yell at subordinates and cry, too?

Critics were quick to call Booker’s comments clear political grandstanding, and said his over-the-top theatrics were linked to his presidential ambitions.

"FOR THE LAST TIME, THESE ARE WHAT JAZZ HANDS ARE" pic.twitter.com/jsi4hO4JYj

“And like that, poof, I’ve lost my mind.” #TrumpDerangementSyndrome https://t.co/IBE3NSOjE9

Would you vote for Cory Booker or Donald Trump in 2020?

You can see video of Booker’s rant here —

"When Dick Durbin called me, I had tears of rage," Booker says. "And for you not to feel that hurt and that pain and to dismiss the questions of my colleagues … with tens of millions Americans hurting right now because they're worried about what happened in the White House." pic.twitter.com/0MS9t8WWM0