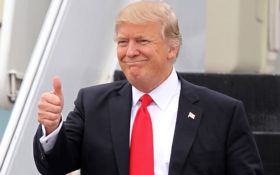 Senate Republicans were poised on Wednesday to break a record for the number of appeals court judges confirmed during any president’s first two years in office — and supporters are thrilled.

Senators voted 50-49 to elect Andrew Oldham as a 5th Circuit judge, making him President Donald Trump’s 23rd nominee to be confirmed. Former President Barack Obama could only successfully get 16 circuit court nominees confirmed by his second year in office.

The previous record was set by President George H.W. Bush, who had 22 appeals court judges confirmed in his first two years.

“The Senate continues to confirm impressive nominees whom President Trump has asked to serve our country,” Senate Majority Leader Mitch McConnell said on Wednesday. “[Oldham] comes highly recommended by colleagues and peers from across the spectrum.”

The GOP has not been shy in their plans to try and shape the director of the U.S. court system for decades — and so far, they are succeeding beyond conservative voter’s wildest dreams.

“I think of the things that we’ve been able to do with this Republican government the last year and a half, the single most long-lasting, positive impact we’ll be able to have on the country is the judiciary,” McConnell told reporters in Kentucky.

By comparison to Trump’s first to years, Obama had only 16 circuit court nominees confirmed by the end of his second year in office. The remaining picks were not confirmed until December of 2010, according to the Senate Judiciary Committee.

Trump has had a record-breaking first two years in office, and Americans cannot wait to see him continue that progress.