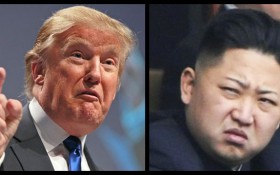 And it was on full display Thursday night, when Trump suggested that North Korean leader Kim Jong Un would “disappear” during his presidency.

And the billionaire businessman named an unexpected trigger man for the job — the Chinese military.

“I would get China to make that guy disappear in one form or another very quickly,” Trump told host Norah O’Donnell during an interview with CBS.

When Trump was asked by O’Donnell if he were calling for Kim Jong Un’s assassination, he coyly shrugged and said, “Well, I’ve heard of worse things, frankly.”

Trump has repeatedly voiced frustration with the Obama administration’s inability to rein in the reclusive North Korean regime. During Obama’s presidency, North Korea has continued to make advancements in its nuclear program, repeatedly provoked South Korea, and developed a missile that can now reach the U.S. West Coast.

China’s tight relationship with North Korea has at times strained ties between China and the United States. But China could fix that problem easily by getting rid of Kim Jong Un, Trump suggested.

“China has control, absolute control over North Korea … and they should make that problem disappear,” he said.

Critics said that kind of statement is normally not the kind a presidential candidate would make.

But as political analysts have often pointed out, the 2016 presidential race is anything from a normal election.

Contrary to the conventional rules of presidential politics, Trump’s bombastic statements have not hurt the billionaire real estate titan’s first bid for public office. Rather, all evidence, including the exit polls of New Hampshire’s primary voters, suggests Trump’s style only helps him.

It remains to be seen if a bullet aimed at Kim Jong-un is the kind of change these voters are looking for. But Trump seems open to exploring the possibility.